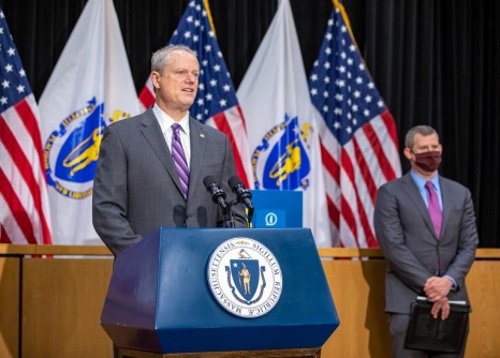 Governor Charlie Baker (R) (seen above) refiled legislation on April 26 to foster road safety improvements across Massachusetts – a bill that includes a primary seatbelt law along with more protections for bicyclists and pedestrians. The governor also refiled separate legislation that seeks to both beef up oversight of rideshare companies and secure more transportation data from them to help the state plan ways to curb greenhouse gas or GHG emissions.

[Above photo via the Massachusetts Governor’s Office]

The governor’s road safety bill – officially entitled “An Act Relative to Improving Safety on the Roads of the Commonwealth” – includes provisions previously filed by the administration in 2019 along with several new proposals, including increasing penalties for individuals who cause personal injury while driving on a non-administratively suspended license.

“These proposals will make Massachusetts roadways and streets safer for all travelers and will help reduce roadway fatalities across the state,” said Gov. Baker in a statement. “This legislative package builds upon laws enacted in 2019 to prevent and enforce distracted driving, and we look forward to working with our partners in the Legislature to take additional steps to improve road safety.”

“The new laws are first and foremost in keeping with our goal to reduce the number of deaths on our roads,” explained Jamey Tesler, acting secretary for the Massachusetts Department of Transportation.

“Crashes due to distracted driving, speeding, and other unsafe driving behaviors, continue to occur on Massachusetts roadways despite reduced driving levels during the pandemic, and these proposals will help refocus and change current driving habits and behaviors to ensure that individuals remain safe,” he said.

Meanwhile, the governor filed separate legislation seeking to increase “comprehensive oversight” statewide of Transportation Network Companies or TNCs such as Uber and Lyft.

That bill would beef up public safety requirements while seeking to access additional ride data to assist with traffic planning, congestion management, and vehicle emissions tracking.

The governor’s office noted in a statement that transportation emissions account for more than 40 percent of “climate-changing” emissions in Massachusetts – and as ridesharing continues to expand statewide, this bill would ensure the state has “the data we need” to combat climate change and achieve net zero emissions by 2050.

The governor’s legislative package – entitled “An Act Relative to Transportation Network Companies” – would also provide greater “flexibility” for the existing ban on “surge pricing” emergencies while also expanding the types of companies subject to state TNC laws and regulations.