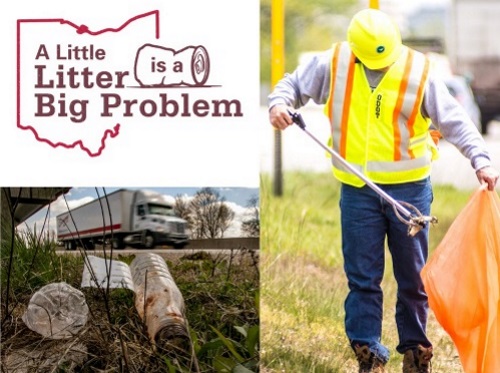 [Above image via the Ohio DOT]

The campaign – called “A Little Litter is a Big Problem” – aims to show state residents the negative impact litter has on the state’s transportation system, parks, beachfronts, and waterways.

“Litter is ugly and costly,” explained Governor Mike DeWine (R) in a statement. “One of the things we can all do is help clean up litter, because a little bit of litter is a big problem.”

He pointed to recent research that shows 42 percent of state residents admitted littering in the past month.

The Ohio DOT noted that it alone has spent at least $48.6 million to deal with litter since 2011. Last year, its staff spent 151,410 hours picking up trash, the agency said.

“Every year [our] crews have to divert their attention from important maintenance work to pick up other people’s trash,” emphasized Jack. Ohio DOT’s director Marchbanks – noting that the agency spent at least $48.6 million to deal with litter since 2011 and that its staff spent 151,410 hours picking up trash in 2020 alone.

“If we can work together to reduce the amount of litter that collects on our roadways, our crews can spend less time picking up trash and more time on critical maintenance work like pothole and guardrail repairs,” he said.

State departments of transportation across the country are conducting similar anti-litter campaigns.

“Litter is one of the biggest sources of complaints for RIDOT and has us spending hundreds of thousands of dollars a year in a seemingly never-ending battle of picking up trash along our roads,” Peter Alviti, Jr., the agency’s director, in a statement. “We’re upping our game and enlisting the help of the business and volunteer community to help us address this blight on our roads.”

RIDOT, which said it spends $800,000 annually to pick up trash on state roads, noted that the goal of this campaign is to remove 1 million pieces of litter. The agency is also seeking to buy specialized litter removal equipment that attaches to its maintenance vehicles for some $750,000 so it can rake and clean litter from strips of land and other larger green spaces along roads more easily.

“Even with reduced traffic on our roads for a significant amount of time in the past year, our litter problem has persisted,” noted Nicole Majeski, Delaware DOT secretary, in a statement.

“We are committed to reducing the amount of litter along our roads and I am grateful to our employees, partners, and volunteers who continue to work hard collecting litter across the state,” she said.

Finally, the North Carolina Department of Transportation recently noted that its litter removal efforts – including the ongoing Litter Sweep annual trash removal effort – resulted in the collection and clearing of more than 4 million pounds of roadside litter so far in 2021.

NCDOT said in a statement that its ongoing litter management programs are “multifaceted,” making use of “state-owned forces and contract services.”

That includes its “Sponsor-A-Highway Program” that​ allows businesses, organizations and individuals to sponsor litter removal along roadsides as well as its Adopt-A-Highway Program, where volunteers pledge to clean a section of our highways at least four times a year.