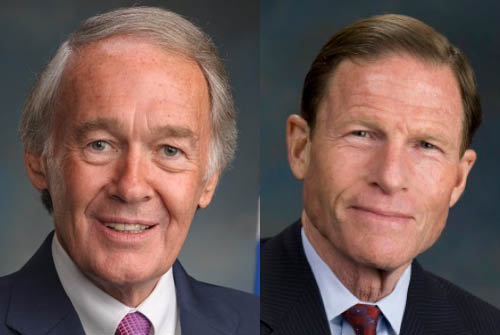 Sen. Edward Markey, D-Mass., (above at left) and Sen. Richard Blumenthal, D-Conn., (above at right) reintroduced four bills on April 26 designed to improve automotive and traffic safety across the United States – bills they want included in an infrastructure funding package and surface transportation reauthorization legislation.

“Every year on average, over 36,000 people are killed and nearly three million more are injured in motor vehicle crashes,” noted Sen. Markey in a statement.

“These numbers reveal a public health crisis that we must not accept as inevitable. We can prevent these unnecessary tragedies with proven strategies and technologies,” he explained. “Upgrading our roads and highways also means upgrading safety.”

[Editor’s note: Patrick McKenna made a similar argument regarding the “public health crisis” aspect of motor vehicle crashes during his one-year tenure as the 2019-2020 president of the American Association of State Highway and Transportation Officials. AASHTO recently appointed McKenna, the executive director of the Missouri Department of Transportation, to a two-year term as chair of its Committee on Safety.]

“No less than roads and bridges, safer cars and drivers must be part of an infrastructure initiative,” added Sen. Blumenthal. “We must upgrade lagging auto recalls, deficient defect investigations, unsafe distracted driving, substandard seat backs, and other clear and present dangers.”

Those four bills are: