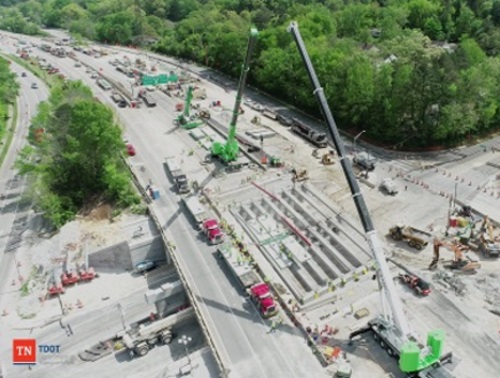 The Tennessee Department of Transportation released its annual three-year transportation construction program update on April 28; a plan that earmarks some $2.6 billion in infrastructure investments for 68 individual project phases in 45 counties across the state.

The program supports the very first executive order issued by Governor Bill Lee (R) in 2019 by funding work on 58 highway and bridge projects in “economically distressed” and “at-risk counties” statewide.

“Investing in infrastructure is an important part of driving economic opportunity throughout our state,” the governor said in a statement. “This funding, particularly for rural Tennessee, will help to keep Tennesseans safe and moving in the right direction.”

The program emphasizes the repair and replacement of bridges, with activities beginning on 55 structures in 33 counties – with 21 of those bridges on the state highway system, with the other 34 on local roads.

The program also builds on the IMPROVE Act – legislation passed in 2017 that raised the state fuel tax on gasoline by six cents per gallon and diesel by 10 cents per gallon over a three year period to pay for road and bridge improvements. The Tennessee DOT said its new three-year construction plan contains “budgets dollars” for 123 of the 962 projects listed as part of the 2017 legislation.

Oklahoma DOT Gets Approval for $8.6B Construction Plan