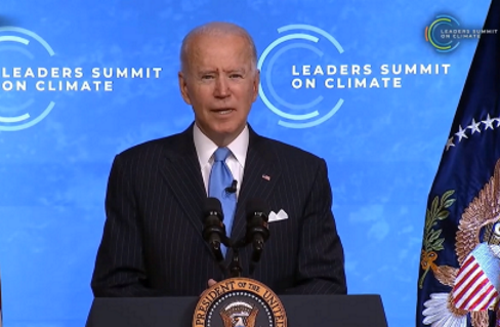 In conjunction with the recent “Leaders Summit on Climate,” President Joe Biden (seen above) launched the U.S. Trade and Development Agency’s Global Partnership for Climate-Smart Infrastructure – an initiative between U.S. industry groups and key federal agencies, including the U.S. Department of Transportation, to deliver clean energy and transportation solutions to emerging markets around the world.

[Above image via the USTDA]

President Biden announced the partnership during a keynote speech on April 23 describing the “broad economic benefits” of climate action and the importance of ensuring that all communities and workers benefit from the transition to a clean energy economy.

“Nations that work together to invest in the cleaner economy will reap rewards for their citizens,” the president said in his remarks. “The United States is committed … to making those investments to grow our economy here at home while connecting with markets around the world.”

The USTDA said this new “climate partnership” endeavor will leverage its “project preparation and partnership-building activities” in emerging markets. Since 1992, the agency said it has supported $4.1 billion in U.S. climate technology and services exports from 350 communities across the United States, including $337 million in exports from 180 small U.S. businesses.