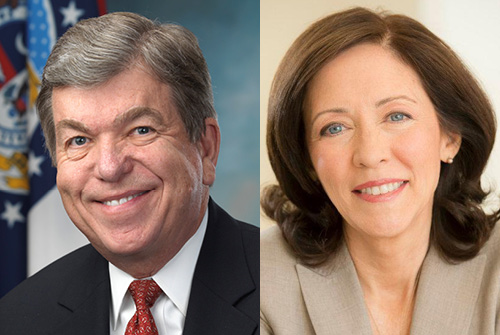 Key members of the Senate Committee on Commerce, Science, and Transportation introduced legislation on April 29 that seeks to provide $500 million annually for five years to improve safety and reduce congestion at railroad crossings.

That bill – authored by Sen. Maria Cantwell, D-Wash., (above at right) the committee’s chair, and Sen. Roy Blunt, R-Mo. (above at left) – noted that incidents at railroad crossings account for about 30 percent of all rail-related fatalities. That is why the bill seeks to help states, cities, and tribal authorities fund grade crossing separation projects as well as other track relocation projects to improve safety or reduce traffic congestion.

“Too many people are injured or killed at at-grade crossings, and the safest crossing is one that does not exist,” Sen. Cantwell said in a statement.

“Crossings can also delay the movement of people and goods, hurting our [nation’s] competitiveness,” she noted. “With the volume of freight shipments projected to increase 17 percent by the year 2030, it is critical we act now to address this urgent infrastructure need.”

“As a state with the 10th largest number of railroad miles in the nation, Missourians are no stranger to the safety issues and inconveniences caused by rail crossings,” added Sen. Blunt.

“Getting rid of rail crossings will reduce traffic jams, improve the quality of life, and – most importantly – increase safety in communities across the state,” he said. “In addition, removing crossings will increase the reliability of our rail network and strengthen Missouri’s role as a national transportation hub.”

The American Association of State Highway and Transportation Officials voiced its support for this proposed legislation, noting that, “reducing the number of highway and railway at-grade crossings blocked by trains is crucial for highway and pedestrian safety, as well as better connecting communities separated by railroad tracks.”

The lack of funding for railroad crossing improvements has been an issue for some time.

Rep. Peter DeFazio, D-Ore., chair of the House of Representatives Committee on Transportation and Infrastructure, held a hearing on that issue in February 2020.

“States and localities have tried to address some of the grade crossing issues they face but have a hard time keeping up – often with little financial support from the federal government or railroads,” he explained during that hearing. “While the railroads advocate for closing more grade crossings, these projects often aren’t realistic solutions in densely populated communities that have been built around rail lines.”

Rep. DeFazio noted that grade crossing separation projects could increase capacity and free-flowing movement for both trains and vehicles, while reducing vehicle-train conflict and increasing safety.

The U.S. Department of Transportation’s John A. Volpe National Transportation Systems Center added an interesting wrinkle to that discussion via a report in January 2020 touting the use of unmanned aerial vehicles – known as UAVs or drones – by the Federal Railroad Administration to produce accurate 3-D models of high-profile grade crossings.

Volpe’s report recommended that FRA pursue the development of a software tool that can analyze three-dimensional models of railroad grade crossings to produce a single number: the inches of ground clearance required for a vehicle with a 30-foot wheelbase to safely traverse a grade crossing.