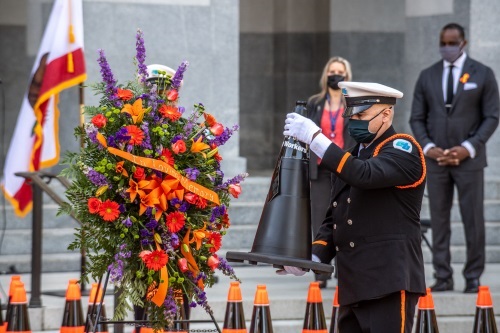 The California Department of Transportation honored the lives of 189 highway workers killed in the line of duty during its 31st annual memorial on the West steps of the California State Capitol – a tribute that did not include a public event due to the COVID-19 pandemic.

Caltrans placed 189 orange traffic cones in a diamond “caution sign” configuration, each bearing the name of a worker lost since 1921. A single black cone at the center of this formation represented all workers lost on the state highway system, including private contractors and California Highway Patrol officers.

The commemoration included six honor guards who watched over the symbolic tribute, with flags flown at half-staff both at the State Capitol and at all Caltrans facilities across the state in honor of those lost.

“We remain impassioned as ever to honor our fallen heroes and their families again this year,” explained Toks Omishakin, Caltrans director, in a statement.

“Though we did not assemble for our traditional ceremony, our hearts are united in solidarity as we pause today to remember the sacrifices made by these individuals and their loved ones,” he said.

According to the U.S. Bureau of Labor Statistics, highway construction and maintenance work is one of the most hazardous occupations in the United States.

In 2019, more than 7,062 work zone collisions occurred on California roadways, resulting in an estimated 2,073 injuries and 48 fatalities. Nationally, drivers and passengers account for 85 percent of the people killed in highway work zones.