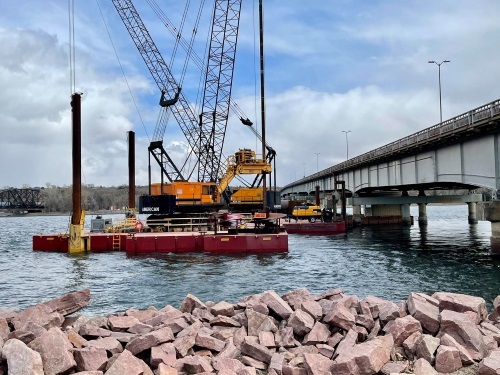 The Federal Highway Administration recently observed the 50th anniversary of its National Bridge Inspection Standards or NBIS; the basis for the federal program that helps protect nearly 620,000 bridges across the country.

[Photo by the South Dakota DOT]

“For a half-century, NBIS standards have been at the core of federal infrastructure safety efforts,” noted Stephanie Pollack, FHWA’s acting administrator, in a statement.

“The data we collect under the program help keep bridges safe and identify areas where maintenance is needed before problems arise,” she said.

The NBIS program – which now encompasses 618,456 bridges, up from 588,735 bridges or a 4 percent increase over the last two decades – mandates regular inspections of highway bridges to detect any potential structural problems early – as well as verify bridge maintenance schedules.

FHWA added that state departments of transportation inspect each and every bridge at least once every 24 months.

FHWA officially adopted the NBIS regulations in 1971 after the collapse of the Silver Bridge in West Virginia in 1967 due to a crack in the bridge’s suspension chain. That tragedy, which cost the lives of 46 people, brought national attention to the issue of bridge condition safety and led to a systematic effort to ensure oversight at the national level.