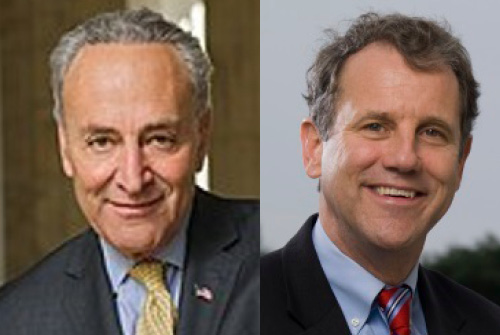 Two key Senate Democrats introduced a $73 billion plan on May 4 to transition the nation’s transit buses and vans to Zero Emission Vehicle or ZEV platforms.

The “Clean Transit for America” plan – introduced by Sen. Chuck Schumer, D-N.Y., (above at left) the senate’s majority leader, and Sen. Sherrod Brown, D-Ohio, (above at right) chairman of the Senate Committee on Banking, Housing and Urban Affairs – would replace America’s 70,000 mass transit buses and 85,000 cutaway/transit vans to “clean energy vehicles.” The plan would also prioritize funding for areas with the worst air quality first.

Currently in the United States, only 2 percent of buses are ZEVs, argued Sen. Schumer in a statement. He added that the volume of air pollutants from diesel buses disproportionally affects low-income communities and communities of color.

“To reduce the carbon in our atmosphere and address the climate crisis, we must transform our transit system,” he said. “The Clean Transit for America proposal will replace dirty, diesel-spewing buses, create new American jobs, help save the planet and protect public health, particularly in our country’s most vulnerable communities.”

“Americans deserve world-class public transportation that is delivered with modern, zero-emission buses built by American workers,” added Sen. Brown. “The Clean Transit for America Plan will create a significant number of good-paying, union jobs building zero-emission buses in the U.S. It is the kind of transformative investment we need in public transit that will put Americans to work [and] connects people with opportunity.”

In a related effort, Sen. Tom Carper, D-Del., recently outlined a “vision” for how the Environmental Protection Agency could adopt standards to reduce greenhouse gas or GHG emissions in the automotive industry and eliminate tailpipe pollution from new cars by 2035.

“The future of the automobile manufacturing sector is at a crossroads,” Sen. Carper – chairman of the Senate Committee on Environment and Public Works – explained in a letter to EPA Administrator Michael Regan.

“The Clean Air Act provides sufficient authority for the EPA to rise to this challenge,” he said in a statement released with the letter. “EPA can establish requirements on new cars that would significantly reduce air pollution harming communities, put the nation on track to maintain its leadership in vehicle technology, and make significant progress in fighting climate change.”

Sen. Carper added that “if the U.S. does not establish a robust policy that leads to ZEV deployment” he warned the nation “will be at risk of losing our automotive jobs and industry leadership to other nations, as well as enduring unnecessary public health impacts from pollution.”