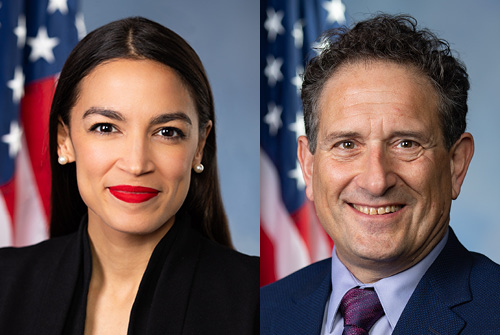 Rep. Andy Levin, D-Mich. (above at right), and Rep. Alexandria Ocasio-Cortez, D-N.Y. (above at left), reintroduced an updated version of the Electric Vehicle or EV Freedom Act on May 5 – a bill that aims to electrify America’s highway system and “take necessary and profound steps” to combat climate change.

“This bill demonstrates what good policy looks like when organized labor and environmental justice groups unify behind the banner of good jobs and a livable planet,” he said.

“The seriousness of the threat posed by climate change demands a transformative public policy response, and we must invest in the people and the communities that will put our plans in action,” Rep. Levin noted. “The EV Freedom Act includes strong labor provisions to focus on local workers and high-quality training programs to provide great new opportunities to a diverse population.”

“Over two years ago, we introduced the Green New Deal … [which] outright rejected this idea that jobs and justice and environmental progress are in competition with one another,” Rep. Ocasio-Cortez noted.

“In fact, we can create a just economy and millions of union jobs by actually transitioning and decarbonizing our economy and saving our planet,” she said. “The EV Freedom Act is a piece of legislation that upholds those core Green New Deal principles.”

According to the particulars of the updated EV Freedom Act – which Rep. Levin and Rep. Ocasio-Cortez originally introduced in February 2020 – the bill would: