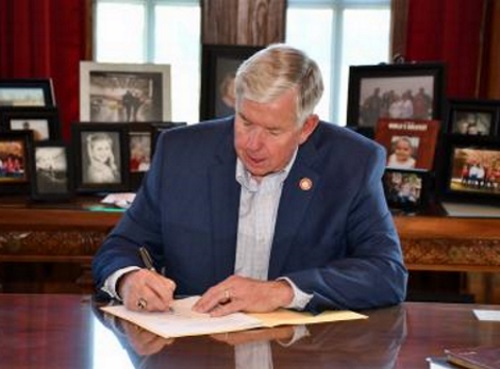 Governor Mike Parson (R) (seen above) is expected to sign into law a 12.5-cent increase in the state’s 17-cent per gallon motor fuel tax – an increase that will occur over the next five years.

[Above photo by the Missouri Governor’s Office]

According to news reports, on May 12 the Missouri legislature passed a motor fuel tax increase measure – which begins with a 2.5-cent per gallon hike on October 1 – that would also increase electric vehicle fees by 20 percent annually for five years, with fees varying by the size of the vehicles.

Missouri’s fuel tax hike also contains a provision, one modeled after South Carolina’s motor fuel tax structure, that allows motorists to obtain a refund if they save their fuel receipts and submit them to the state.

Since 2013, at least 29 states raised their motor fuel taxes. However, that momentum slowed down during the COVID-19 pandemic. Missouri’s increase is the first since Virginia lawmakers successfully passed a fuel tax increase in March 2020.

Proponents of Missouri’s fuel tax hike argued that extra revenue is critical to meeting the state’s highway and bridge repair needs. In 2019, the Missouri Department of Transportation issued a report that indicated the state faced a deficit of $825 million in annual unfunded “high-priority” mobility system improvements.

Concurrently, Gov. Parson signed into law HB 15, a supplement budget bill that provides additional funding for a variety of state services – one that includes $100 million for road construction needs.

According to a statement from the governor, HB 15 totals more than $2.1 billion, including $254.8 million in general state revenue, $1.7 billion in federal funds, and $116.7 million in other funds.