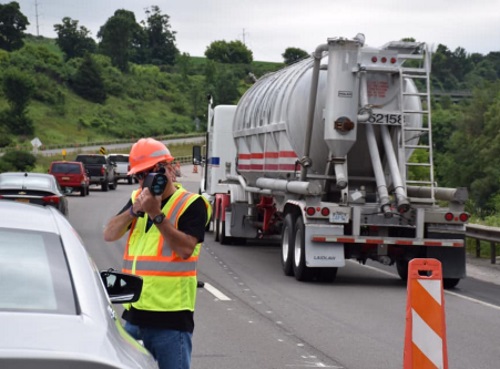 The annual weeklong effort in New York to crack down on work zone violations resulted in 444 tickets issued by law enforcement personnel statewide.

[Above photo by NYSDOT]

“Our highway workers do vitally important work in often hazardous conditions so that we can all get where we need to go safely and with minimal delays,” said Governor Andrew Cuomo (D) in a statement – adding that six highway workers in state work zones ended up hospitalized during the last week of April due to work zone crashes.

[To highlight the dangers work zone crews face, the Thruway Authority also released video of an April 19 incident on I-90 near Albany when a motorist entered the work zone and hit a Thruway maintenance truck.]

Under “Operation Hardhat,” police officers are present within the work zones, dressed as highway maintenance workers, to identify motorists who are distracted by electronic devices while driving, disobey flagging personnel, speed through the work zone or violate the state’s Move Over Law, which applies to both emergency and maintenance vehicles.

The New York State Police conducted the majority of the Operation Hardhat details across the state, while the Oneida County Sheriff’s Office collaborated with NYSDOT to stage a detail at a work zone near Kirkland, issuing 17 tickets.

“Operation Hardhat is an incredibly effective way to enforce work zone safety and I can’t thank our partners in law enforcement enough for the work they are doing to help protect our transportation workers, who each day, face enormous hazards on the job,” said Marie Therese Dominguez, NYSDOT commissioner.

“It’s imperative that motorists put down their phones, pay attention and drive safely in highway work zones and show our transportation workers the respect they deserve,” she noted.