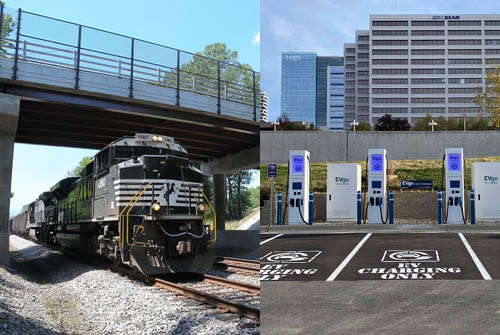 [Above photos via the Virginia Department of Environmental Quality and Virginia DOT.]

Virginia recently issued more than $9.4 million via the first round of its Clean Air Communities Program to fund five government fleet electrification projects, providing a second round of $20 million in funding to help electrify diesel and propane school buses statewide.

The state established its Clean Air Communities Program – administered by the Virginia Department of Environmental Quality – to oversee funds coming from the Volkswagen Environmental Mitigation Trust.

“Supporting clean transportation solutions is a vital part of our efforts to combat climate change and improve air quality in the Commonwealth,” said Governor Ralph Northam (D) in a statement. “These investments will reduce harmful vehicle pollution, which disproportionately impacts marginalized communities, and help accelerate an equitable transition to a cleaner economy for all Virginians.”

Meanwhile, the Commonwealth reached an agreement with Norfolk Southern Railway to extend passenger rail service to the New River Valley for the first time since 1979.

Known as the Western Rail Initiative, the $257.2 million agreement will increase intercity passenger rail service from Roanoke to the Northeast Corridor; funding that includes $38.2 million for acquisition of right-of-way and track for approximately 28.5 miles of the Virginian Line from the Salem Crossovers west of Roanoke to Christiansburg along with $219 million in infrastructure investments.

“Bringing passenger rail service back to the New River Valley will fuel tourism, drive economic growth, and create new opportunities for the region’s 180,000 residents and 40,000 college students,” the governor said in a separate statement.

“A key part of our Transforming Rail in Virginia program, the Western Rail Initiative will support critical infrastructure improvements necessary to modernize our transportation system and connect communities across the Commonwealth,” he explained. “This agreement is the result of collaboration among many partners, and we look forward to continuing this important work to enhance mobility in an equitable and environmentally sustainable way.”

He added that Virginia and Norfolk Southern continue to work to finalize definitive legal agreements, with execution of those agreements planned by the end of 2021.

To help further statewide passenger rail expansion efforts, the board of directors for the Virginia Passenger Rail Authority or VPRA recently appointed Donald “DJ” Stadtler, Jr. to be its first executive director.

Established during the 2020 General Assembly session, the VPRA is responsible for promoting, sustaining, and expanding the availability of passenger and commuter rail service in Virginia.

Stadtler previously served as an executive vice president at Amtrak for 12 years as part of his “extensive” rail industry career.

“The Commonwealth welcomes DJ Stadtler to the Virginia Passenger Rail Authority as we transform the future of rail in our Commonwealth,” Gov. Northam noted in a statement. “The work of the VPRA will be critical to expanding service, improving reliability, and enhancing mobility—and ensuring it happens in an equitable, environmentally sustainable way.”

“His leadership will create a great opportunity for the Commonwealth to continue its focus on customer service, safety, and performance as we unlock the potential of rail in Virginia,” she said.