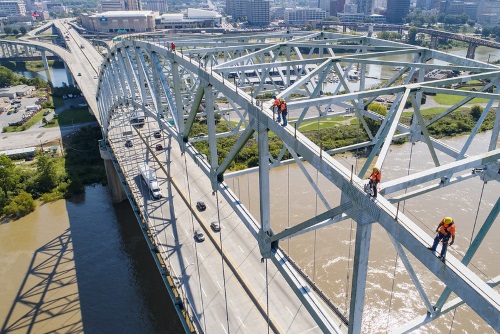 The discovery of a major crack in the steel structure of the Interstate 40 highway bridge spanning the Mississippi River between Arkansas and Tennessee – known as the Hernando De Soto Bridge – sparked not only a months-long emergency repair effort but also a potentially major traffic congestion issues for both states.

[Above photo by the Arkansas DOT]

On May 11, Arkansas Department of Transportation bridge inspectors discovered a crack in the structure of the I-40 bridge, forcing the closure of the bridge and detour vehicle traffic to the I-55 bridge three miles away; a detour that is creating traffic delays.

The Arkansas DOT determined that there “was a failure in the inspection process” which allowed evidence of damage to the I-40 bridge to go unnoticed, explained Lorie Tudor, the agency’s director, in a statement.

She noted that drone video collected by Michael Baker International showed evidence of the structural fracture in May 2019 as the company performed an inspection of the cables and upper portion of the bridge, not the metal supports below. As a result, the Arkansas DOT is changing the inspection process by adding redundancies, with further changes possible in the future.

Meanwhile, Tennessee DOT Commissioner Clay Bright noted on May 17 that his agency awarded the I-40 emergency bridge repair project to Kiewit Infrastructure Group, which expects to fix the bridge in two phases – noting that it needs to complete both phases of the repair before the bridge can re-open to vehicular traffic.

“At this point, we are unable to project a re-opening date,” Bright said in a statement.