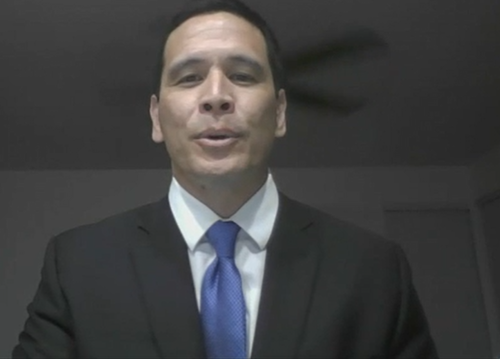 Formula funding mechanisms are critical to building more resilience into the nation’s transportation system, argued Edwin Sniffen (seen above), deputy director of highways for the Hawaii Department of Transportation, during a May 13 Senate Committee on Appropriations.

Appearing before the subcommittee on transportation, housing and urban development, and related agencies, Sniffen said transportation resilience is about “balancing today’s needs with the future and setting the plans and processes so that addressing adaptation is the default.”

That is why, he said, all of Hawaii DOT’s operational divisions have initiated climate adaption studies in response to ongoing and forecasted climate change.

“When your transportation systems are surrounded by water, like ours, climate adaptation is a must. However, I would like to make the argument that climate adaptation is necessary for all, regardless of their geography,” Sniffen explained in his written testimony. Yet simply moving transportation infrastructure out of “harm’s way” is neither the most practical nor economical solution.

“The 2017 ‘Hawaii Sea Level Rise Vulnerability and Adaptation Report’ forecasts one meter of sea level rise affecting the Hawaiian Islands by 2100. If we took a traditional approach of relocating transportation facilities, we would be looking at an estimated $30 billion to relocate or elevate state roads and bridges, address impacts to airports, and protect the state’s commercial harbor facilities,” he explained.

That is where resiliency comes into play, Sniffen stressed.

“I believe that the definition of resilience is critical and should not be related simply to the ability of an asset to not fail during certain events such as a bridge strike or a category-five hurricane,” he emphasized. “Rather, it needs to involve the ability of a state department of transportation to anticipate, plan, and adapt to potential risks; withstand, respond to, or recover when an event occurs; and construct and maintain assets that decrease project vulnerability risks.”

“When considering funding for resilience, the current core formula program eligibility could be expanded to consider resilience improvements,” he said. “Or formula funding could be set aside to focus on resilience-related planning, coordination, and evacuation; or, a discretionary grant program for adaptation strategies could be established. [However] AASHTO generally recommends avoiding new plans, programs, and analysis processes as this increases cost and burden to state DOTs.”

Sniffen added that additional funding and an expedited project delivery process would “greatly aid” getting more resilience initiatives out of the theoretical stages and into practice on the nation’s streets, bridges, runways, and harbors.

“The Hawaii DOT is currently approaching building resilience into our systems using a variety of approaches, including pursuing green infrastructure such as carbon mineralized concrete and adding recycled plastics to asphalt mixes,” he noted. “Investing in resilient infrastructure on a federal level will enable us and other transportation agencies to implement better and greener infrastructure.”