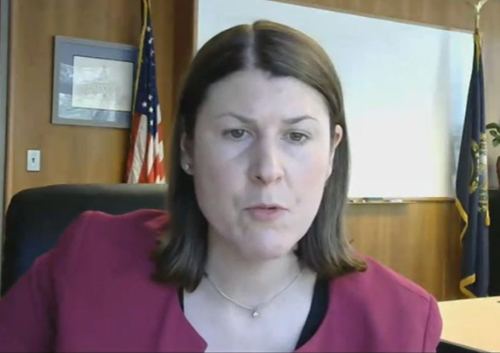 Without timely reauthorization of surface transportation funding legislation, revenue for the Highway Trust Fund will become uncertain. That uncertainty presents a problem for state departments of transportation, which will find it “nearly impossible” to plan future infrastructure investments without knowing if they will have the necessary multi-year funds available.

Those are some of the arguments made by Victoria Sheehan (seen above) – commissioner for the New Hampshire Department of Transportation and the American Association of State Highway and Transportation Officials 2020-2021 president – during a May 18 Senate Committee on Finance hearing.

As a result, Congress should consider a mix of new short- and long-term funding options to provide more fiscal support for transportation investments nationwide, she explained.

“Projects that state DOTs undertake connect people, enhance the quality of life for our citizens, and – just as important – stimulate economic growth in each community where they are built,” Sheehan said in her written testimony.

“However, the current trajectory of the HTF – the backbone of the federal surface transportation program – is simply unsustainable as it will have insufficient resources to meet current federal investment levels beyond fiscal year 2021,” Sheehan noted.

She said, according to recently released baseline projections from the Congressional Budget Office, that in order to simply maintain the current HTF spending levels adjusted for inflation, Congress will need to identify $74.8 billion in additional revenues for a five-year surface transportation reauthorization bill through 2026.

Meanwhile, the purchasing power of HTF revenues dropped substantially over the last several decades – mainly as the federal government has not adjusted its per-gallon motor fuel taxes since 1993.

Sheehan noted in the question and answer portion of the hearing that in 2019 AASHTO’s board of directors passed a resolution that suggested several potential revenue solutions for the HTF. Those include raising the federal motor fuel tax and indexing it to inflation; adding freight-based user fees; adding per-barrel oil fees; and continuing to advance a mileage-based or vehicle miles traveled (VMT) fee solution.

Separately, AASHTO’s board of directors stressed in a recent resolution that any mileage-based user fee program should “build on the leadership and expertise of state DOTs,” as many are currently conducting long-term VMT test pilots.

For example, the Oregon Department of Transportation noted in January that it is now pilot testing the state’s pay-per-mile road usage charge or RUC system, known as OReGO, at the city and county level. The agency said in a statement that it is now recruiting motorists via a survey to determine their eligibility for this study, which will run through the summer of 2021.

Sheehan emphasized during her testimony that one key to managing a successful transition to a VMT program is managing the collection cost of fees from system users.

“As we transition to any new solution, we need to study the cost of collection closely,” she explained. “Because it is extremely important that state DOTs have certainty around funding. Any shortfall is disruptive to the communities we serve and creates challenges for construction communities that conduct that work.”

With all that said, however, Sheehan said AASHTO “strongly believes” federal surface transportation funding must continue to be focused on direct formula-based apportionments from the HTF to states and transit agencies.

“And the HTF can only be fixed with real revenue solutions, and not be substituted by financing tools such as the Transportation Infrastructure Finance and Innovation Act program, infrastructure banks, or any program that provides direct loans or loan guarantees to support transportation projects,” she added.

“Whichever revenue tools are utilized, AASHTO looks forward to assisting you and the rest of your Senate colleagues in finding and implementing a viable set of revenue solutions that will renew our national heritage of investment in our country and our future through transportation,” Sheehan said.