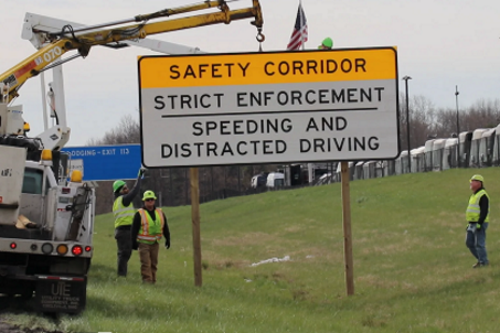 Distracted driving is an increasing problem on U.S. roadways, with crashes involving a distracted driver killing 3,142 people in 2019 – the latest year for which data is available – which is up nearly 10 percent from 2018.

Every state currently has restrictions in place to address distracted driving, but the laws vary in scope and rigor. Some states – including Ohio, Michigan and Utah – are considering legislation in 2021 to enhance their distracted driving laws.

State departments of transportation are also engaged in a variety of efforts to reduce distracted driving.

In July 2020, the Ohio Department of Transportation and Ohio State Highway Patrol created a 12-mile long distracted driving safety corridor running along U.S. 33 between the Fairfield/Franklin County Line and SR 188.

Since its implementation, OSHP troopers significantly increased enforcement on U.S. 33, which resulted in fewer crashes and fatalities. From July 2020 through April 2021, the Ohio DOT noted in a statement that distracted driving crashes along that corridor declined by 44 percent while fatalities dropped 61 percent as compared the timeframe between 2019 and 2020.

Distracted driving is still near the top of the list when it comes to crashes on Texas roadways, coming in second place for traffic-related crash causes, according to the Texas Department of Transportation.

The agency added that, in 2020, distracted drivers caused nearly one in five crashes in Texas – crashes that killed 364 people and seriously injured another 2,200.

“A serious or fatal crash can happen in an instant,” said James Bass, TxDOT’s outgoing executive director, in a statement. “If you’re distracted by your phone, or doing anything else that takes your focus away from driving, you’re putting yourself, your passengers and everyone else on the road at risk. Distracted driving crashes are 100 percent preventable.”

As a result, TxDOT is re-launching its web-based augmented reality game “Dart Those Distractions” to reinforce the importance of paying attention behind the wheel.

The Transportation Research Board recently noted in a blog post that when a person reads a text while driving, their eyes are off the road for an average of five seconds. At 55 miles per hour, that is equivalent driving the length of a football field while blindfolded, the group said.

The most effective laws and safety policy to curb the use of distracting devices while driving had the following common elements, according to that report:

Benedick also spoke with TRB’s Transportation Explorer’s podcast about some of the most effective strategies for combated distracted driving.

To that end, the AAA, Advocates for Highway and Auto Safety, the Governors Highway Safety Association, the Insurance Institute for Highway Safety, and the National Safety Council recently unveiled a collaborative “checklist” that can serve as a roadmap for communities that are establishing or expanding automated enforcement programs.

“Research by IIHS and others has shown consistently that automated enforcement curbs dangerous driving behaviors and reduces crashes,” noted IIHS President David Harkey in a statement. “We hope this document developed with our highway safety partners will help communities take full advantage of this tool.”