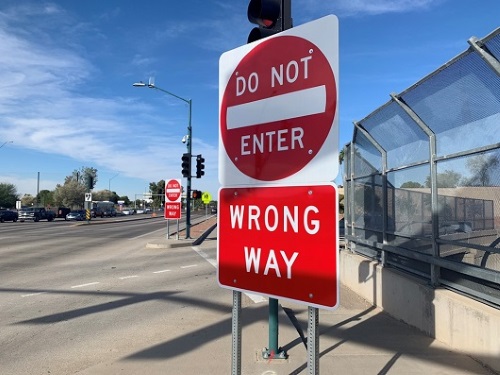 The Arizona Department of Transportation is installing larger, more visible wrong way signs along three interstates in the southern part of the state as part of an ongoing effort to get the attention of drivers who travel in the wrong direction.

The agency said in a statement that more and larger “wrong way” and “do not enter” signs at freeway exit ramps are key “countermeasures” for reducing the risk of serious crashes by wrong-way drivers, who are frequently impaired when entering highways in the wrong direction.

The Arizona DOT noted it first installed 26 of those larger signs above the left lanes of I-17 in Phoenix in 2017 in association with its deployment of a first-in-the-nation thermal-camera wrong-way vehicle alert system.

The new “wrong way” signs along exit ramps are 48 by 36 inches in size, up from 30 by 24 inches. At the same time, the bottom edge of the signs will be about 3 feet above the ground, rather than 7 feet, so they are closer to a driver’s line of vision.

This sign project – paid for with federal highway safety funds and expected to wrap up in 2022 – is part of an ongoing statewide initiative to replace older signs with ones that are easier for drivers to see because they are larger and closer to the ground.

The Arizona DOT noted that it would also add white pavement arrows pointing in the correct direction of travel at both new and current “wrong way” and “do not enter” sign locations.