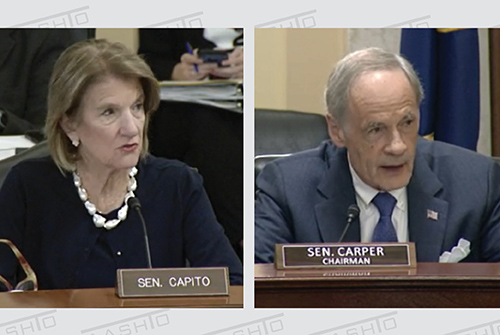 The Senate Committee on Environment and Public Works passed a five-year, $303.5 billion surface transportation reauthorization bill on May 26 by a unanimous vote of 20-0.

The EPW’s bill also provides $273.2 billion or 90 percent of its total funding via formula apportionments to states and retains all current core formula programs, including a 55 percent suballocation for Surface Transportation Block Grant programs.

“I’m proud that we’ve advanced a robust, bipartisan investment in our nation’s highways, roads, and bridges,” noted Sen. Tom Carper, D-Del., the EPW committee chairman, in a statement. “This legislation is an important first step in the critical work needed to upgrade our nation’s infrastructure in a way that creates jobs, combats climate change, and lifts up all Americans for a brighter future.”

“The Surface Transportation Reauthorization Act is the product of months of good-faith negotiations with a lot of back and forth,” added Sen. Shelley Moore Capito, R-W.Va., the committee’s ranking member.

“The quality of the bill and today’s overwhelmingly bipartisan vote are a testament to the care, time, and effort of both Republicans and Democrats,” she said, noting this bill “takes meaningful steps” to repair the nation’s roads and bridges, create jobs, and simplify the permitting process.

“The bill is flexible to states’ unique needs and responsive to the urgent need for investment,” Sen. Capito pointed out.

“The proposed [bill] provides much-needed program stability through its five-year funding platform,” noted Jim Tymon, executive director of the American Association of State Highway and Transportation Official, in a statement.

“The bill also continues to utilize the proven foundation of the Federal-aid Highway Program,” he said

According to an analysis by AASHTO, EPW’s surface transportation bill – originally unveiled on May 22 – offers several new discretionary and climate-focused programs, including:

Access the full text of the Surface Transportation Reauthorization Act by clicking here. Additional materials include a section-by-section breakdown of the bill along with tables for state-by-state apportionments and authorizations.