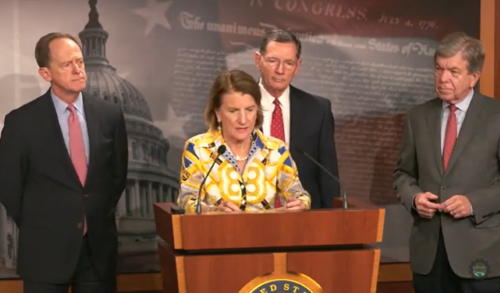 A group of six key Republican senators increased their infrastructure funding counteroffer on May 27 to the $2.3 trillion American Jobs Plan proposed by President Joe Biden on March 31.

The Republicans increased their counteroffer to $928 billion over eight years – up from a five-year, $568 billion infrastructure investment framework originally proposed on April 22 – that would be largely paid for by “repurposing” unused federal funds previously allocated for COVID-19 relief efforts.

“We believe that this counteroffer delivers on what President Biden told us in the Oval Office … to try to reach somewhere near $1 trillion over an eight-year period of time and includes our baseline spending,” explained Sen. Shelley Moore Capito, R-W.Va., the ranking member on the Senate Environment and Public Works Committee, during a video news conference. “We have to achieve that goal with this counteroffer.”

“We want to focus on actual infrastructure: The platforms and services that move people and goods and services through our economy,” added Sen. Pat Toomey, R-Pa., ranking member one the Senate Committee on Banking, Housing, and Urban Affairs. “That’s what people understand to be infrastructure, and we can reach an agreement if we focus on those items.”

This counteroffer comes after the president reduced the size of his initial American Jobs Plan proposal from $2.3 trillion to $1.7 trillion on May 21.

Jen Psaki, White House press secretary, noted in a statement that, “It is encouraging to see her [Sen. Capito’s] group come forward with a substantially increased funding level nearing $1 trillion. We appreciate the hard work that went in to making this proposal and continuing these negotiations.”

However, the Republican proposal does not make any changes to the 2017 tax law overhaul passed during President Trump’s administration. That overhaul reduced the corporate tax rate to 21 percent, which President Biden seeks to raise back to 28 percent to pay for his infrastructure plan.

“We are concerned that the proposal on how to pay for the plan remains unclear: we are worried that major cuts in COVID relief funds could imperil pending aid to small businesses, restaurants and rural hospitals using this money to get back on their feet after the crush of the pandemic,” she noted.