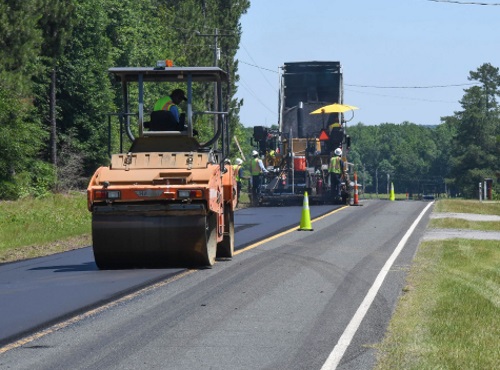 [Above photo by the SCDOT]

That plan aims to rehabilitate and resurface nearly 1,000 miles of state roads over the next two years, along with replacing or repairing aging bridges, making rural roads safer, and improving key portions of interstates.

Those nearly 1,000 miles of roads scheduled for new pavement include larger primary routes, which carry the most traffic, as well as secondary or farm-to-market roads plus neighborhood streets.

The agency said in a statement that this $642 million paving program – funded by a six-year, 12-cent increase in the state fuel tax which wraps up in 2022 – is in addition to the $1.7 billion of projects SCDOT is currently implementing during year four of its 10-year road quality improvement plan.

SCDOT added that since 2017 South Carolina has allocated more than $1.3 billion from its New Gas Tax Trust Fund to support new paving projects. The addition of this year’s $642 million worth of paving projects will result in nearly $2 billion of paving projects in a five-year period; a record for the agency.

In total, the state gas tax, vehicle sales tax and other fees, plus federal funding sources are enabling SCDOT to triple its work program to a historic $3.2 billion.

“Our paving program is a start in repairing a highway system that been neglected for three decades,” noted Christy Hall, SCDOT’s secretary, in testimony before the state’s transportation commission in 2020.

“We have 8,400 bridges in our system – each one a critical link in the system,” she added. “And our economy is dependent upon good interstates to keep our economic growth moving forward.”