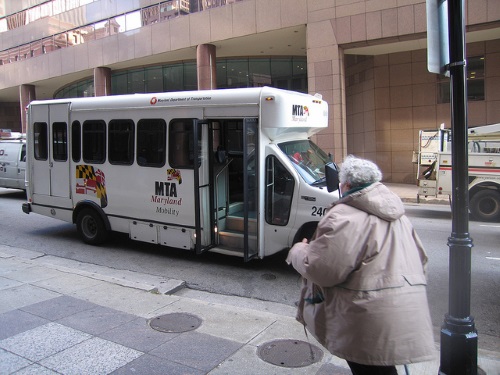 Three Senate Democrats introduced legislation on May 18 that seeks to establish a federal grant program to support legacy transit and commuter rail authorities to upgrade existing stations to meet or exceed accessibility standards under the Americans with Disabilities Act or ADA.

[Above photo by the Maryland Transit Administration]

That legislation – called the All Stations Accessibility Program or ASAP Act of 2021 and sponsored by Sen. Tammy Duckworth, D-Ill., Sen. Sherrod Brown, D-OH, and Sen. Bob Casey, D-Penn. – notes that, according to Federal Transit Administration data, as of 2019 nearly 20 percent of all transit stations were not ADA accessible.

To fix that, the ASAP Act would appropriate $10 billion over 10 years – at least $1 billion annually – to fund a discretionary grant program supporting local transit and commuter rail authorities to increase the number of existing accessible stations or facilities that meet or exceed accessibility design standards under the ADA for rapid rail and commuter rail systems.

[Editor’s note: Rep. Jesús “Chuy” García, D-Ill., and Rep. Marie Newman, D-Ill., introduced companion legislation to the ASAP Act in the House of Representatives on May 18.]

“While we’ve come a long way since the ink dried on the ADA more than 30 years ago, but we still have a long way to go to make this country truly accessible, including making sure that every American can use our nation’s public transportation systems,” Sen. Duckworth said in a statement. “It’s imperative that transit systems continue to make accessibility a priority.”