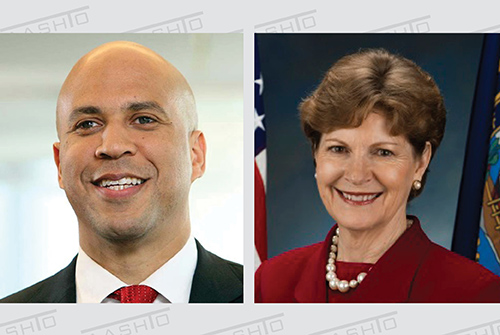 Sen. Jeanne Shaheen, D-NH, (above at right) and Sen. Cory Booker, D-NJ, (above at left) reintroduced the Toll Credit Marketplace Act on May 25 to establish a program to help states increase resources for highway and transit projects.

The bill would direct the U.S. Department of Transportation to establish a “marketplace” for the sale and purchase of toll credits accrued when states use toll revenues to invest in transportation projects that benefit the interstate system.

While toll credits lack cash value, states could use those credits to cover the local match on federally funded highway and transit projects – especially as many states find themselves left with more toll credits than they can use.

“Toll credits represent dollars being left on the table that could and should be put to good use on a myriad of infrastructure needs,” Sen. Shaheen noted in a statement.

A toll credit marketplace would also give states an “opportunity to get real value for these credits that they can turn around and invest meaningfully to repair our roads, bridges and other transit infrastructure that otherwise can’t be assisted with toll credits,” she added.

Victoria Sheehan, commissioner of the New Hampshire Department of Transportation, noted that New Hampshire currently has a balance of more than $200 million in toll credits. The bill, then, would allow New Hampshire to sell those excess toll credits to other states to bring in new revenue.

“New Hampshire is proud of the investments we have made in the Turnpike System [and] that investment has grown our toll credit balance,” noted Sheehan, who also serves as the 2020-2021 president for the American Association of State Highway and Transportation Officials.

“We would welcome the opportunity to turn toll credits into cash, so that we can improve safety and roadway conditions across the state,” she said.

Sen. Shaheen noted that states receive credits from the federal government when it uses toll revenues to fund projects that benefit the interstate system or interstate commerce.

States can then use those toll credits as part of their required matching share on federally funded highway and mass transit projects. Though the credits are not cash and cannot be used for any purpose other than as state matching funds, they could provide significant savings because they free up state money that would be used to meet the federal matching requirement.

In addition to creating a marketplace for states to buy and sell toll credits, Sen. Shaheen and Sen Booker’s bill would: