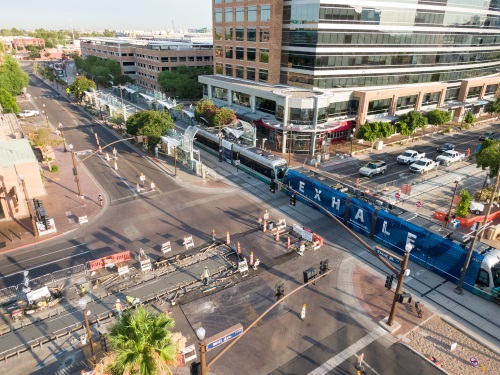 The U.S. Department of Transportation’s Build America Bureau recently issued new guidance to clarify the eligibility of transit-oriented development or TOD projects for both public and private firms seeking loans.

[Above photo by the Federal Transit Administration]

The agency said TOD seeks to foster economic development near transit, rail, and intercity bus facilities — to create walkable residential and commercial centers. Community-focused investments like TOD are integral to the Biden-Harris Administration’s priorities, noted USDOT Secretary Pete Buttigieg in a statement – including efforts to connect communities and reducing the climate impacts of transportation.

“When people can move safely and easily by public transit, foot, bike, wheelchair, or any other means, it can transform a community and improve the lives of those who call it home,” he explained.

Buttigieg added that this new guidance also “will help communities use transit-oriented development to save residents time and money, reduce pollution and carbon emissions, and make jobs accessible to more people.”

USDOT added that there is currently nearly $100 billion of lending capacity available through the TIFIA and RRIF programs.

USDOT pointed out that Congress, via the Fixing America’s Surface Transportation or FAST Act, determined that TIFIA and RRIF financing could support TOD projects, yet USDOT needed to set “clear eligibility guidelines,” which became a barrier to using these funds for that purpose.

This new guidance opens the door to project sponsors interested in pursuing TOD projects in keeping with the Biden-Harris Administration’s priorities.

This new guidance also follows on heels of the Federal Transit Administration making $10 million in grants for TOD projects available in late April.