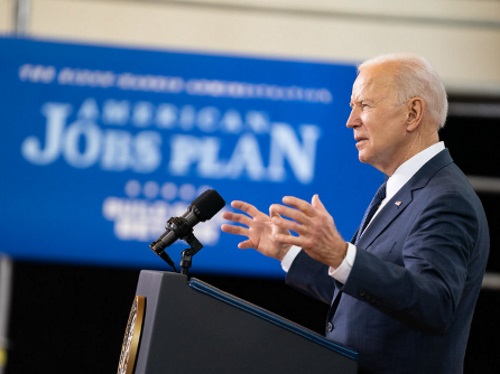 The 72-page fiscal year 2022 budget request issued by the Office of Management and Budget on May 28 seeks $88.2 billion for the U.S. Department of Transportation – an increase of $352 million or 0.4 percent over the enacted FY 2021 level, though that number does not include funding proposed by President Biden (seen above) within his American Jobs Plan.

The overall $6 trillion budget proposal by the president includes the $2.3 trillion outlay proposed by the American Jobs Plan as well as $1.8 trillion American Families Plan or AJP, which offers among other things to provide four-years of free post-high school education, a national comprehensive paid family and medical leave program, plus free childcare.

President Biden said in a joint address before Congress on April 28 that those investments would “build on the American Jobs Plan’s investments in school and child care infrastructure and workforce training.”

Analysis by the American Association of State Highway and Transportation Officials indicates that alignment of the president’s FY 2022 budget request with the AJP – found on pages 9-20 of USDOTs budget highlights – detail the transportation investments envisioned under the AJP as well as via surface transportation reauthorization legislation. The $540 billion proposed in the AJP for programs within USDOT are in addition to the base amounts in the FY2022 budget request.

While President Biden’s request does not include a formal legislative reauthorization proposal, it does include specific “reauthorization principles” that also align with transportation goals outlined in the AJP. Those are safety; equitable economic strength and improving core assets; ensuring investments meet racial equity and economic inclusion goals; resilience and addressing climate change; plus transformation of the nation’s transportation infrastructure.

The $88.2 billion proposed for the FY 2022 USDOT budget would also maintain “flat funding” of contract authority for the Highway Trust Fund throughout the full 10-year budget window – meaning enacted FY 2021 levels of $58.8 billion would remain for FY 2022. Meanwhile, funding for Rebuilding American Infrastructure with Sustainability and Equity or RAISE grants – formerly known as BUILD/TIGER grants – would remain at $1 billion, supported by the Treasury’s general fund.

In terms of the modal breakdown within the proposed FY 2022 funding for USDOT, the Federal Highway Administration would receive $47.1 billion. However, while FHWA funding that flows from the Highway Trust Fund would remain at the same level as FY 2021, the president’s FY 2022 budget proposal does not include the $2 billion in FHWA general fund funding included in the final FY 2021 appropriations bill.

A separate breakdown of the transportation funding within the president’s budget request issued by the USDOT highlights several new program proposals.

Those include $110 million for a new “Thriving Communities” program within the Office of the Secretary to support communities with eliminating “persistent transportation barriers” while increasing access to jobs, schools, and businesses.

It also includes $625 million for a new Passenger Rail Improvement, Modernization, and Expansion or PRIME program to modernize and develop passenger rail services while expanding existing rail corridors – a program that would replace the FRA’s existing State of Good Repair program.

U.S. Transportation Secretary Pete Buttigieg is also requesting a further $2.5 billion to advance the construction or completion of 25 rail, bus rapid transit and streetcar projects in 12 states, as well as other projects that may become ready for funding in FY 2022.

“Across the country, communities are seeking to expand public transit as a way to create economic opportunity, improve safety, advance equity, reduce congestion and pollution, and lower the cost of living for their residents,” he said in a statement.

“These capital projects … are the start of what we hope will be a once-in-a-generation investment to modernize and expand public transit across the country,” Buttigieg added.