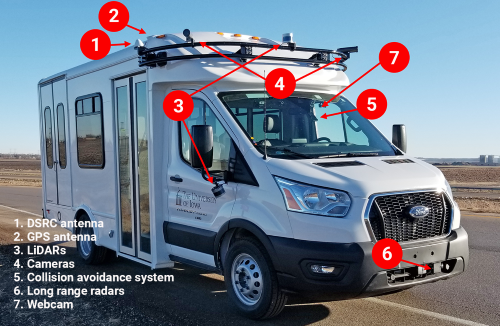 [Above photo by the University of Iowa]

The University of Iowa’s National Advanced Driving Simulator or NADS is overseeing this project as part of a $7 million research grant awarded by the U.S. Department of Transportation.

“Our mission is to look at the connection between all road users and how we can make things safer,” explained Omar Ahmad, project manager, and NADS deputy director, in a statement.

“When we look at automated vehicles, it is clear there’s an over-emphasis on urban areas and interstates,” he added. “Until now the focus has been on perfect roads in perfect weather—we will examine the challenges of rural environments, which are often imperfect.”

The road “scenarios” Ahmad expects this test vehicle to confront include inconsistent lane markings and surface conditions; disparities in the speed and type of vehicles using the roadway, such as farm equipment; and inclement weather, including heavy snow that obscures paved surfaces. “We didn’t want to just cherry-pick roads that are going to be easy,” he added. “We really wanted to throw real-world USA roads at it, so we can get an honest assessment. [Automated vehicles] should work just as well on these types of roadways as in cities and on interstates.”

There is a safety aspect to this automated shuttle bus test as well, Ahmad noted, as only 19 percent of Americans live in rural areas, while nearly 50 percent of fatal traffic crashes occur on rural roads.

A separate self-driving study is underway to help develop the first “code of practice” for autonomous vehicles operating in unstructured off-highway environments, with a live trial conducted in a quarry using a number of off-road vehicles.

Conducted by Oxbotica and TRL, those off-highway environments – often located in rural areas — include mines, quarries, farms, refineries, warehouses, ports, and airports. Such off-highway environments also feature more varied hazards and less structured scenarios than on-road settings, as there are no universal highway rules, such as speed limits or junction etiquette.

“In order to harness the true power of this technology, operational regulations need to be developed in unison to ensure safe and efficient deployment,” explained Ben Upcroft, vice president of technology for Oxbotica, in a statement.

“This ‘code of practice’ seeks to provide high-level guidance to organizations in all sectors of the off-highway industry on the ways in which working practices should be adapted to ensure that the adoption of autonomy is as smooth and safe as possible,” added Ianto Guy, TRL’s project lead. “The aim is that this code will support safe practice, build public confidence, and encourage the cooperation between organizations across all industries employing off-highway autonomous vehicles.”