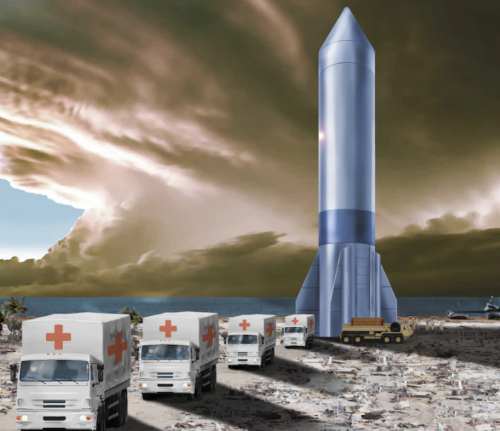 As part of its Rocket Cargo Vanguard program, the U.S. Air Force has assigned its Air Force Research Laboratory or AFRL to determine the viability and practicality of using large commercial rockets for handling global logistics delivery needs for the U.S. Department of Defense.

[Above graphic via the U.S. Air Force]

AFRL will research and develop the unique aspects needed to leverage the new commercial capability for the logistics mission of the U.S. military, the Air Force noted. This includes the ability to land a rocket on a wide range of non-traditional materials and surfaces, including at remote sites.

In addition, AFRL scientists and engineers will research the ability to safely land a rocket near personnel and structures, engineer a rocket cargo bay and logistics for rapid loading and unloading, and air drop cargo from the rocket after re-entry in order to service locations where a rocket or aircraft cannot possibly land.

Based on the advertised commercial capability and business objectives, AFRL said its research team is “currently assessing emerging rocket capability across the commercial vendor base,” and its potential use for quickly transporting U.S. military materiel to ports across the globe.

“The Air Force has provided rapid global mobility for decades and Rocket Cargo is a new way the Department can explore complementary capabilities for the future,” said John Roth, acting secretary of the Air Force, in a statement. “Vanguard initiatives lead to game-changing breakthroughs that preserve our advantage over near-peer competitors, and this latest addition is also a significant milestone as the first Vanguard evaluated under the Space Force’s oversight.”

While delivering cargo via rocket transportation is not a new concept, the Air Force noted, high launch costs have been historically prohibitive for a logistics-focused application, while the relatively small payload capability constrains the types and amount of cargo that can be delivered – also limiting such a program’s suitability.

“Rapid logistics underpins our ability to project power,” he explained. “That is the fundamental motivation for initiating the Rocket Cargo program. We see its initial applications in swiftly restoring operational capability for forces forward in austere environments as well as dramatically reducing the time required to deliver crucial humanitarian assistance and disaster relief.”