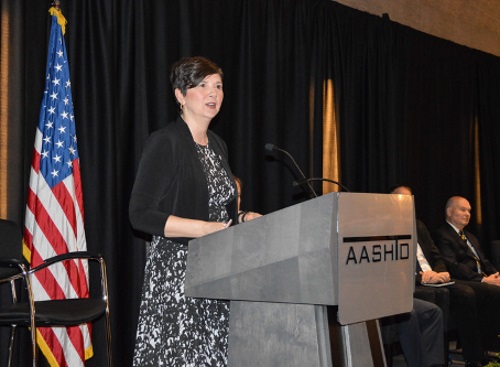 Brandye Hendrickson (seen above) will be joining the Texas Department of Transportation as its new deputy executive director effective July 19.

Hendrickson – who currently serves as the deputy director for the American Association of State Highway and Transportation Officials – is filling the position vacated by Marc Williams, who became TxDOT’s executive director on June 1.

“We are thrilled to have Brandye join the TxDOT family in this important role,” Williams said in a statement. “Her demonstrated experience in the areas of operations, policy, people and project funding are going to help us take TxDOT to a new level as we fulfill our mission of Connecting You with Texas. Her breadth of transportation expertise and leadership will serve Texas well.”

Hendrickson joined AASHTO in July 2019 after serving as both deputy and acting administrator of the Federal Highway Administration for two years. While at AASHTO, she worked on critical legislative initiatives that included COVID-19 relief aid for state departments of transportation along with other key transportation funding efforts.

Hendrickson also helped AASHTO form a new strategic plan that incorporated an increased focus on diversity, equity, and inclusion initiatives across the organization.

A graduate of Indiana University, Hendrickson worked for the Indiana Department of Transportation from 2006 to 2017, first as deputy commissioner for human resources, then as a deputy commissioner overseeing operations for the Greenfield District – the agency’s largest district that encompasses the state capital of Indianapolis. She also served as interim commissioner of the Indiana DOT in 2013 before eventually serving as the agency’s CEO from 2015 to 2017.

“Brandye has a proven track record as a leader in transportation with her background as CEO of the Indiana Department of Transportation, then serving as acting administrator of the Federal Highway Administration in Washington, D.C.,” noted J. Bruce Bugg, Jr., chairman of the Texas Transportation Commission. “We couldn’t be more pleased to have her join us at TxDOT.”

“It is my honor to have the opportunity to join such an amazing and well-respected team of professionals,” added Hendrickson. “I look forward to working together to advance a transportation system that enhances the quality of life of all Texans.”