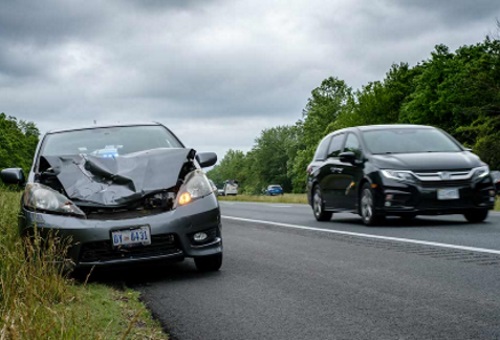 Crashes involving stopped or disabled vehicles that may not have stood out enough to alert other motorists to the danger they pose are contributing to hundreds of roadway fatalities and thousands of injuries per year, according to a study conducted by Impact Research and highlighted by the Insurance Institute for Highway Safety.

[Above photo by IIHS]

Using federal crash statistics, data analysis firm Impact Research estimated that 566 deaths and 14,371 injuries annually between 2016 and 2018 occurred in crashes on all types of roads involving a disabled vehicle in which visibility was likely a factor. The annual societal cost of those crashes totaled around $8.8 billion in medical payments, lost wages, and the less easily quantified costs of death or disability, the firm said.

“This study identifies a part of the road safety equation that doesn’t get much attention, despite the size of the problem,” noted David Zuby, executive vice president and chief research officer at the Insurance Institute for Highway Safety, in a statement.

Impact Research noted that the federal crash databases include codes denoting crashes that involve stopped or disabled vehicles. To estimate how many of those might have resulted because the stationary vehicle was not conspicuous enough, the study’s authors analyzed detailed police reports from a subset of Florida crashes to determine the percentages of different types of collisions that involved a stopped vehicle that was too difficult for other drivers to see. Then they applied those percentages to the broader data set.

Their analysis found that 95 percent of these inconspicuous-vehicle crashes occur when a vehicle traveling down the roadway collides with a stationary one. However, more than half the deaths and almost one in five serious injuries occur when a vehicle strikes a pedestrian who is leaving, working on, or returning to a stopped vehicle.

On average, this type of crash kills 300 pedestrians a year: a number that has risen by more than a quarter since 2014, the study found

“These crashes illustrate the potential value of stopped-vehicle-ahead warnings, which are already provided by some navigation apps and could be integrated to work with advanced driver assistance features and more advanced driving automation,” IIHS’s Zuby added. “They’re also a reminder of why we put so much emphasis on good headlights as a vital crash avoidance technology.”

The study also found that wireless vehicle-to-vehicle communication systems that enable vehicles to exchange information about their speed, location, and heading could help eliminate crashes with disabled vehicles.

That is one reason why the American Association of State Highway and Transportation Officials and the Intelligent Transportation Society of America are suing the Federal Communications Commission in federal court to stop the agency’s plan to reallocate swaths of the 5.9-gigahertz (GHz) wireless communication spectrum to non-transportation uses.

ITS America and AASHTO said in a statement they took this action to ensure vehicle-to-everything or V2X technologies can continue safely operating throughout the 5.9 GHz band.

The lawsuit – filed in the D.C. Circuit Court – seeks to reverse the November 2020 decision by the FCC to shift 60 percent of the 5.9 GHz spectrum to unlicensed, non-transportation uses, while also preserving the full 75-megahertz (MHz) band within the overall 5.9 GHz spectrum for transportation communications.