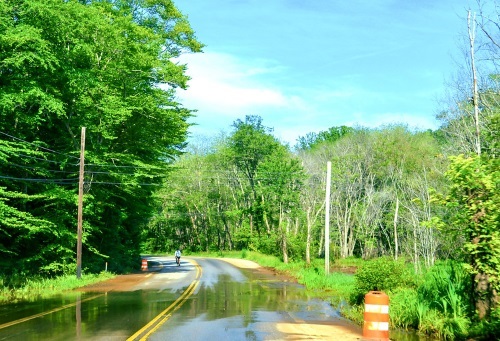 A recent study indicates that major flooding occurring outside designated flood zones is significantly affecting Maryland’s highways, bridges, tunnels, and other roadways. As a result, such flooding “interrupts daily life; delaying or blocking passage of emergency response vehicles and people trying to get to work or school.”

[Above photo by Maryland DOT]

The study – entitled “Flooding Impacts on Maryland’s Transportation System and Users” by strategic consulting firm ICF with support from The Pew Charitable Trusts – examines how flooding affects nearly 15,000 lane miles of state-maintained roadways, or roughly about 20 percent of Maryland’s overall lane mileage. The findings draw from data collected between 2006 and 2020 by the Maryland Department of Transportation.

The report’s researchers reviewed 2,771 flood-related incidents for which geospatial data was available and found that 78 percent occurred outside the 100- or 500-year flood zones mapped by the Federal Emergency Management Agency. Those incidents took place, on average, only about 0.3 miles from the mapped flood areas, but even so, the findings underscore that flooding is not limited to mapped zones.

The report also identified locations along state highways that are especially flood-prone, making them prime targets for infrastructure resilience or relocation investment. Data from the past 15 years shows clusters of flood incidents on state highways, including more than 100 locations with at least five flood events within about 1,000 feet of one another. Seven locations appear to be especially at risk, with at least 30 such incidents among them, the study found.

The report also shows how flooding disrupts travel, causes safety risks, and generates economic productivity losses, among other adverse consequences. Flooding of state-maintained roadways in Maryland accounts for weeks of traffic disruptions annually, averaging 1,582 hours or 66 days per a year. Although most flood-caused lane closures lasted less than four hours, 16 percent of all disruptions lasted longer than 12 hours.

The study found that those incidents affected, on average, more than 480,000 people annually. On top of that, economic impact of lost work time and delayed deliveries cost about $15 million per year in Maryland and totaled more than $230 million during the study period.

Each flood incident resulted in an average of about $80,000 in user delay costs, Pew’s researchers noted – considered “just a fraction” of the fiscal impact because it does not factor in other expenses, such as emergency response and infrastructure repairs.