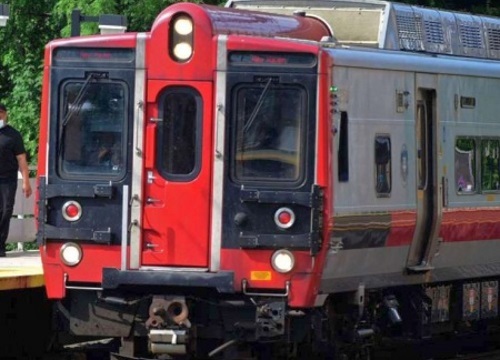 [Above photo via the Connecticut Governor’s Office]

The plan – entitled “TIME FOR CT” – calls for between $8 billion and $10 billion worth of investment over 15 years to provide additional passenger rail capacity and improve train system needs, frequency, and reliability. The plan seeks to reduce 10 minutes of travel time by 2022 – increasing to 25 minutes by 2035 – while using existing rail assets and staying within existing right-of-way.

“Connecticut is home to the most used commuter rail line in the country, and it is a key component of our economic growth, supporting the ability of thousands of people every day to get to their jobs and earn a living,” Gov. Lamont said in a statement.

“But our aging infrastructure is not only slowing our travels, it’s slowing our economic growth,” he stressed. “Nobody wants to live and work in a place where they spend hours stuck in their daily commutes. Faster trains and faster highways mean more jobs.”

“When Governor Lamont appointed me, he charged me with getting the trains to New York faster,” Commissioner Giulietti added.

“The Connecticut Department of Transportation did the research and analysis and developed this foundational and transformational plan,” he noted. “We’re grateful to Governor Lamont, who has kept the pressure on, and to our partners, who are essential to moving this forward.”

In particular, Giulietti said his agency would be seeking help from Amtrak, Metro-North, the labor and construction industry, the Federal Railroad Administration, and state and federal legislators to move Connecticut’s “TIME FOR CT” rail plan forward.

“Total partnership is essential to realize the vision of new, faster, train service to both Grand Central Station and Penn Station,” he said.