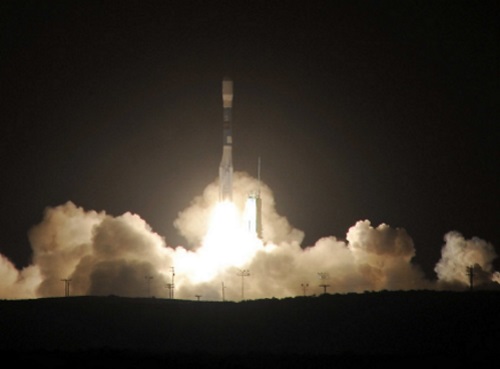 The Federal Aviation Administration and the U.S. Air Force signed an agreement June 15 aimed at eliminating “red tape” governing commercial space activities at ranges operated by the U.S. Space Force, while at the same time re-emplacing safety standards to protect the public.

[Above photo by the U.S. Space Force Command]

The agreement recognizes common safety standards for FAA-licensed launch and reentry activities that occur on, originate from, or return to Cape Canaveral Space Force Station in Florida and Vandenberg Space Force Base in California. In 2020, the FAA licensed 39 commercial space launches – the most in the agency’s history – and those two U.S. Space Force ranges supported 24 of them.

[Editor’s note: To learn more about the FAA’s role and responsibilities in commercial space transportation, listen to the Ticket to Space episode of the agency’s “The Air Up There” podcast.]

Under the agreement, the FAA will accept the Air Force’s ground safety rules and other safety processes, analyses and products as long as they satisfy FAA regulations. Concurrently, the Air Force will accept FAA licensing decisions and generally will not impose its own requirements for the flight portion of a launch or reentry.

Additionally, the agreement removes duplicative processes and approvals within the U.S. commercial space sector. The two agencies also agreed to consult with each other before responding to commercial space operator requests for relief from safety requirements and on the development of hazard areas.

Both also will coordinate prior to publication of materials related to ground safety and launch or reentry activities and collaborate on environmental reviews to ensure the government’s response is prompt and consistent.

“Building a streamlined regulatory approach for commercial space activities at these federal launch sites is the right thing to do for public safety and U.S. competitiveness,” explained Steve Dickson, FAA’s administrator, in a statement. “This agreement will help the burgeoning U.S. commercial space industry grow even faster and continue to lead the world in safety and innovation.”