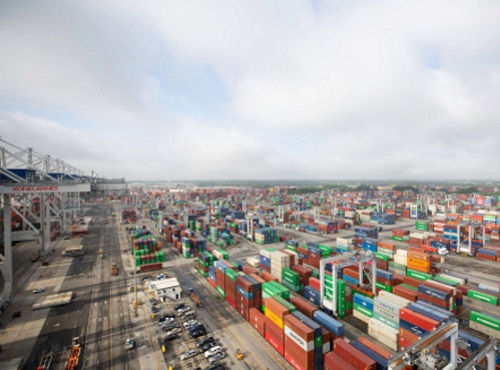 A new report issued by the Maritime Administration indicates shipbuilding and repair activity at both the national and state level by private U.S. shipyards in calendar year 2019 supported $42.4 billion worth of gross domestic product.

[Above photo by the Georgia Port Authority]

MARAD’s new report— entitled “The Economic Importance of the U.S. Private Shipbuilding and Repairing Industry” – found that the nation’s 154 private shipyards directly provided more than 107,000 jobs and contributed $9.9 billion in labor income to the national economy in 2019.

On a nationwide basis – including direct, indirect, and induced impacts – the industry supported 393,390 jobs, $28.1 billion of labor income, and $42.4 billion in GDP, the agency said.

“This report confirms that shipyards are vital economic engines in addition to being essential components of our industrial base,” said Lucinda Lessley, MARAD’s acting administrator, in a statement. “The skilled jobs created by shipyards are not only essential to supporting our military and our commerce; they are contributing to the economic success of communities all over the United States.”

The report states the U.S. shipbuilding industry has run a trade surplus in six out of the last 10 years, with a cumulative trade surplus of $7.3 billion over this period. From 2015 to 2020, U.S. shipbuilders delivered 5,024 vessels of all types including tugs and towboats, passenger vessels, commercial and fishing vessels, and oceangoing and inland barges, reaching 608 vessels in 2020.

More than 60 percent of vessels delivered during the last six years have been inland tank and dry cargo barges, the report noted.

MARAD added that it classifies those 154 private U.S. shipyards– spread across 29 states and the U.S. Virgin Islands – as “active shipbuilders.” Concurrently, there are more than 300 shipyards engaged in ship repairs or capable of building ships but not actively engaged in shipbuilding.