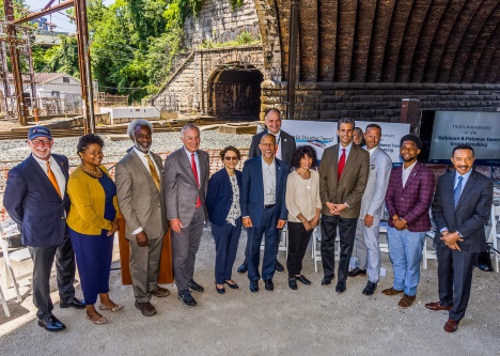 Amtrak and the Maryland Department of Transportation are jointly working to replace the critical Baltimore and Potomac or B&P Tunnel and now plan to rename the passenger rail portion of that tunnel after Frederick Douglass, the Maryland-born Civil War-era abolitionist leader.

Amtrak noted that the B&P Tunnel Replacement Program encompasses a “broad range of investments” to transform a four-mile section of the Northeast Corridor in Baltimore. It includes the new Frederick Douglass Tunnel, a new Americans with Disabilities Act-accessible West Baltimore MARC Station, and the replacement of bridges, track, and rail systems.

Amtrak added that a key benefit of this new plan is that it eliminates diesel train emissions at a ventilation facility on North Avenue in West Baltimore. It also will shave off two years of construction time while saving more than $1 billion.

Amtrak is currently performing final design and initiating property acquisitions to prepare for construction. Pending sufficient funding for the approximately $4 billion investment, early construction activities on the tunnel’s southern approach could begin over the next one to two years.

Built just after the Civil War, the B&P Tunnel is reaching the end of its useful life, according to the Maryland DOT, so this project will modernize a critical part of the Northeast Corridor making the train work better for the 9 million passengers that travel through it each year.

“This is a generational project for passenger rail in Maryland and the entire Northeast Corridor,” explained Gregory Slater, Maryland DOT secretary, in a statement.

“[The] Maryland DOT is proud to partner with Amtrak on the new approach and we are ready to work with Amtrak and the federal government to move a new B&P Tunnel forward,” he added.

“In naming this vital piece of new infrastructure on the Northeast Corridor, we want to highlight Frederick Douglass as a critically important figure in American and Maryland history, whose principles and work inspire Amtrak and align with our own values and mission,” said Stephen Gardner, Amtrak president.

“As Frederick Douglass escaped to freedom by way of a train in Baltimore and traveled extensively by rail, naming this state-of-the-art new passenger rail tunnel after him is a fitting way for us to honor his legacy,” he said.