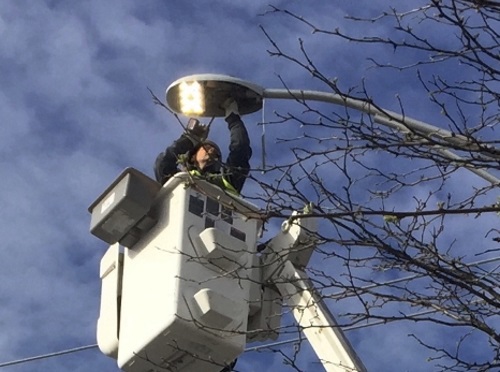 The Rhode Island Department of Transportation recently offered to assume responsibility for the 14,000 or so local streetlights on state roads in 39 cities and towns statewide.

[Above photo by Prism Streetlights]

That offer corrects what the agency termed a “decades old legacy issue” of uncertainty about which public entity is responsible for lights on state roads that are within city or town borders.

RIDOT began looking at this problem in 2019 when the department assessed the cost of assimilating streetlights installed by municipalities on state roads. RIDOT is currently converting roadway lights under its purview from high-pressure sodium to light emitting diode or LED models to save $865,000 annually on lighting costs – mirroring similar conversion efforts initiated by other state departments of transportation across the country.

RIDOT said it has determined it can use the cost savings from its own LED conversion project to acquire those 14,000 local streetlights and cover their maintenance costs – if the municipalities first convert them to LED.

“Once we own these lights, we can make sure they are properly maintained and serviced which ensures that our roadways are well lit and safe for the traveling public,” explained said RIDOT Director Peter Alviti Jr. in a statement – adding that the anticipated cost to maintain those 14,000 lights if converted first to LED models is roughly $845,000 annually.

By requiring the municipalities to convert to LED before the transfer, RIDOT said it not only reduces energy costs but also reduces the carbon footprint of those lights. In addition, it eliminates long-standing issues of ownership and responsibility, Alviti noted, as municipalities installed streetlights on state roads over the last few decades sometimes with the consent of RIDOT and sometimes on their own.

“This had resulted in a hodgepodge of ownership and maintenance issues,” he explained. “What we had was a longstanding issue with the wrong people paying the wrong bills for the wrong lights. Now we will be able to straighten it out.”

“Allowing RIDOT to assume responsibility for streetlights on state roads in our 39 cities and towns is a smart move for public safety, the environment, and municipalities,” noted Governor Dan McKee (D).

“Well-maintained and properly serviced LED streetlights illuminate roadways for drivers, pedestrians, and bicyclists, and are a cost-efficient way to transition to a low carbon economy,” he said. “RIDOT’s initiative also allows municipalities to save money on streetlight maintenance that they can allocate elsewhere.”