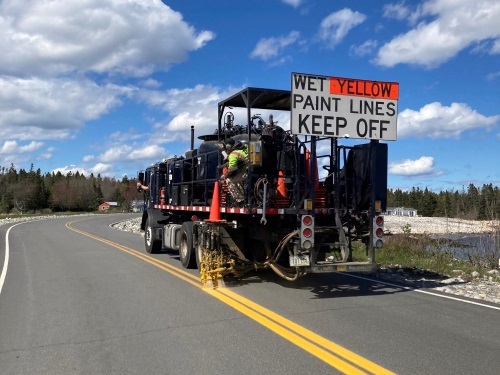 A national resin shortage alongside a global aluminum shortage are affecting a variety of state department of transportation operations across the country.

The Maine Department of Transportation said that resin shortage – caused mainly by a catastrophic winter storm in February that shut down key Texas petrochemical plants – is limiting its road striping operations this year.

The Maine DOT said it is receiving far less paint than expected because the resin used to manufacture the paint continues to be in short supply.

“We currently have less than half the amount of white and yellow paint we had at this point last year,” Brian Burne, the agency’s highway maintenance engineer, said in a statement.

“This is a unique challenge, and there’s no way of knowing when our paint supplies are going to return to normal levels,” he added. “We want to make sure members of the traveling public are aware of this situation and understand why some Maine roads will not receive new paint this year.”

The Maine DOT noted that the paint it has on hand would go toward striping operations on interstates, high-priority highways, and new roads. Consequently, many “lower-priority roads” won’t be restriped in 2021. “Fortunately, the mild winter resulted in less (snow) plowing,” the agency added. “Reduced contact between plow blades and roads minimizes the wear and tear that causes the paint on roads to fade.”

Meanwhile, the Arizona Department of Transportation recently overcame what it calls a “temporary interruption” in the production of vehicle license plates due to an ongoing worldwide aluminum shortage.

The Arizona Correctional Industries – a branch of the Arizona Department of Corrections, known as ACI – has long produced license plates for the Arizona DOT’s Motor Vehicle Division or MVD. However, ACI did not receive a scheduled delivery of aluminum and currently had none in stock for production.

As a result, MVD engaged another vendor – Intellectual Technology, Inc. – on an interim basis, but the time needed for the switch added to the delay. MVD said its license plate production process had “returned to normal” by June 23 – after working double shifts to catch up with existing orders.

However, in a statement, the Arizona DOT noted that ACI and MVD are “not alone in feeling the pinch” when it comes to aluminum supply as at least two other states have encountered license plate production issues in recent months because of supply-chain issues.

“Other industries, like canned-beverage makers and HVAC companies, have been constrained, too. Even the vendor for the aluminum Arizona DOT uses to produce highway signs is experiencing a delay because it is waiting on material,” the agency said. “However, they have product on-hand and [sign making] operations are not expected to be affected at this time.”