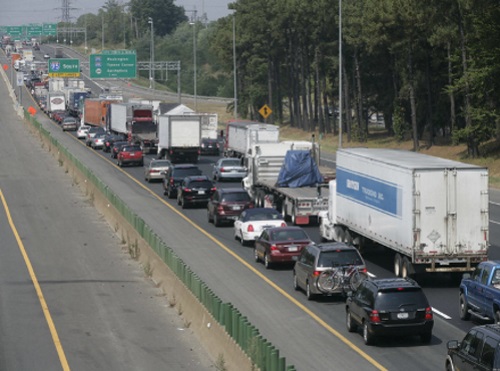 According to a new 38-page report, as the U.S. Interstate Highway System reaches age 65, it is increasingly congested – particularly by large trucks – and is deteriorating due to a lack of “adequate funding” to make needed repairs and improvements.

The report – entitled “America’s Interstate Highway System at 65: Meeting America’s Transportation Needs with a Reliable, Safe & Well-Maintained National Highway Network” and published by the nonprofit transportation research firm TRIP Inc. – examines the interstate system’s use, condition and benefits, while also incorporating findings from a report issued by the Transportation Research Board in 2018.

TRIP’s report builds off two separate research endeavors conducted in 2020 – one dealing with the investment needs of the interstate system and the other on the fiscal needs of America’s rural road network, which the group said suffers from a $211 billion backlog in funding for needed repairs and improvements.

TRIP’s latest interstate report found that from 2000 to 2019, travel on the interstate system increased by 26 percent — a rate nearly triple that of the addition of new lane capacity. As a result, roughly 47 percent of urban interstate highways now face traffic congested during peak hours. TRIP’s research also determined that traffic volume has rebounded from lower COVID-19 pandemic levels. The firm said vehicle travel on U.S. highways dropped by as much as 45 percent in April 2020 compared to April 2019, yet by April 2021 was only 6 percent less than April 2019 levels.

TRIP also cited interstate funding data from TRB’s 2018 report, which concluded that annual investment in the Interstate Highway System should be increased approximately two-and-a-half times, from $23 billion in 2018 to $57 billion annually over the next 20 years.

“A modernized interstate system will be critical to the nation’s ability to fully recover from the COVID-19 pandemic,” he added. “It will require adequate investment in a federal surface transportation program that provides states and local government the funding and flexibility they will need to restore the nation’s most critical transportation link.”

That need for “funding flexibility” is a position supported by the American Association of State Highway and Transportation Officials.

The organization recently co-signed with 68 other groups a June 14 letter urging Senate Majority Leader Chuck Schumer to schedule “floor time” for the 2021 Surface Transportation Reauthorization Act or STRA before Congress adjourns for its annual “state work period” in August.

“Investing in infrastructure remains a transformational opportunity for Congress to improve the nation’s economy, create thousands of good-paying jobs, and build for the future,” the letter stressed. “An announcement of floor time for the STRA consideration would be a strong signal of preserved continuity of federal funds and help facilitate necessary action among other relevant Senate committees.”