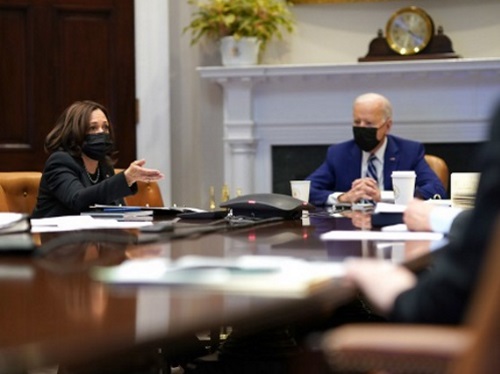 President Joe Biden (seen above at right) and a group of 21 senators – comprised of 11 Republicans and 10 Democrats – agreed to an eight-year, $1.2 trillion infrastructure investment “framework” on June 24 that includes roughly $579 billion in new funding for roads, broadband internet, electric utilities, and other “traditional” infrastructure projects.

According to news reports, however, that “framework” needs the support of Senate Majority Leader Chuck Schumer, D-New York, in order to meet the 60-vote threshold for passing pass legislation in the Democratic-controlled Senate under regular order.

To pay for those investments, the so-called “G-21 framework” relies on a broad mix of revenue sources that include:

In remarks following the announcement of the bipartisan infrastructure framework, President Biden said, “we made serious compromises on both ends.” However, he added that he still plans to support “dual-track” efforts in Congress to pass additional funding proposed in his $2.3 trillion American Jobs Plan and $1.8 trillion American Families Plan earlier this year.

“Republicans and this group did not want to go along with my — any of my Family Plan issues — the childcare tax credits, the human infrastructure that I talk about,” the president said in his remarks.

“And that — we’ll see what happens in the reconciliation bill and the budget process — if that — if we get some compromise there,” he noted. “And if we can’t, see if I can attract all the Democrats to a position that is there. But we’re going to — they’re going to move on a dual track. And — and that’s all I’ll say.”

“I appreciate the fact that the president came out today to express what we all believe, which is we didn’t get everything we wanted, but we came up with a good compromise that’s going to help the American people,” noted Sen. Rob Portman, R-Ohio, one of the Republican negotiators, during remarks to the press following the deal’s announcement.

“This is roads and bridges, but also lots of other kinds of infrastructure, including broadband, our water system, and our rail system, all of which is good for the economy,” he added. “This will lead to more efficiency and higher productivity, more economic growth. This is about the long term.”