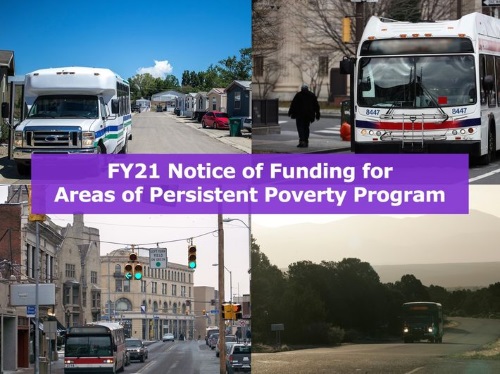 The Federal Transit Administration issued a notice of funding opportunity on July 1 for $16.3 million in competitive grants for transit projects that help lift communities out of poverty. Applications are due to the agency by August 30.

[Above photo collage by the FTA]

FTA said that its Areas of Persistent Poverty Program supports planning, engineering and technical studies or financial planning to improve transit services in any areas experiencing long-term economic distress, in rural and urban communities alike. It can also fund low and no emissions transit vehicles and associated infrastructure, the agency added.

Along with a focus on underserved communities, projects will be selected, in part, on their ability to increase racial equity, in keeping with the President’s Executive Order 13985, entitled “Advancing Racial Equity and Support for Underserved Communities Through the Federal Government.”

FTA Administrator Nuria Fernandez (being sworn in at right by USDOT Secretary Pete Buttigieg) said project ratings would also benefit from their ability to “lessen environmental damage” to communities that “have historically faced greater impacts from air, water and ground pollution.”

“This program will support local strategies to help remove barriers to opportunity and increase equity in underserved communities,” she added in a statement. “We want to ensure that transportation connects people to people, people to jobs and school, and people to all kinds of opportunities.”

Eligible projects for this funding opportunity must be located:

FTA added that grant applicants can use USDOT’s Persistent Poverty Project Status Tool to determine if a proposed project is in an “Area of Persistent Poverty,” which is now defined differently from previous years in order to create “consistency in definitions” across USDOT programs, including in the RAISE Grant program.