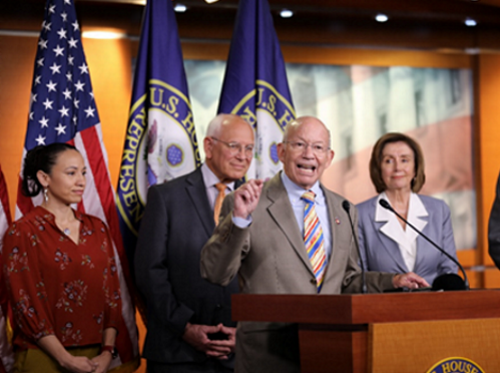 The House of Representatives passed the “Investing in a New Vision for the Environment and Surface Transportation in America” or INVEST in America Act on July 1 by a vote of the 221-201, with eight members not voting.

[Above photo via the House of Representatives]

The $715 billion package includes the five-year, $547 billion surface reauthorization bill – H.R. 3684 – along with $168 billion for drinking and wastewater infrastructure.

Similar to the House Transportation and Infrastructure Committee’s adoption of the surface transportation title by a vote of 38-26 on June 10, the bill cleared the House with only two Republicans in support alongside all 219 Democratic members.

According to analysis by the American Association of State Highway and Transportation Officials, the INVEST in America Act provides $430 billion from the Highway Trust Fund from fiscal year 2022 to FY 2026. Compared to the Fixing America’s Surface Transportation or FAST Act, the INVEST in America Act provides funding increases from FY 2021 to FY 2022 of 514 percent for passenger rail, 59 percent for transit, and 29 percent for highways. The highway funding increases are fully dedicated to highway and transit earmarks in FY 2022, then move to other programs after FY 2022.

The overall highway funding in the INVEST in America Act is $334 billion over five years — some $30 billion higher than the Senate’s Surface Transportation Reauthorization Act, passed unanimously out of committee on May 26.

Yet the House bill provides $255 billion over five years to existing apportioned highway programs to states, which is $4 billion less compared to the Senate’s proposal.

Still, Jim Tymon – AASHTO’s executive director – characterized passage of the INVEST in American Act as a “major step toward reauthorization” of the federal surface transportation program.

“With infrastructure investment being the top national priority, AASHTO continues to call for a bipartisan bill that strengthens and builds upon formula-based funding to states, while maintaining the flexibility necessary to allow states to deliver national transportation priorities,” he explained in a statement.

“We also believe a robust five-year surface transportation reauthorization must be the centerpiece of any enacted infrastructure package and look forward to assisting Congress and the Biden Administration to get across the finish line by September 30,” he added.