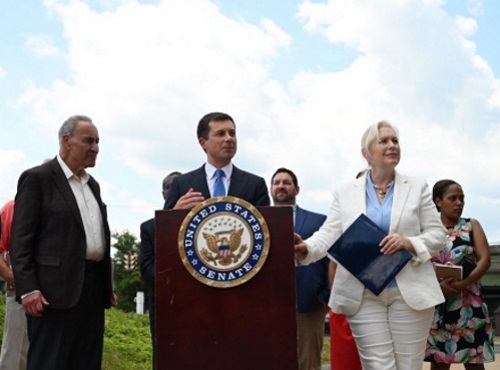 The U.S Department of Transportation plans to award $905 million to 24 projects in 18 states via the Infrastructure for Rebuilding America or INFRA discretionary grant program.

[Above photo of USDOT Secretary Pete Buttigieg by the USDOT]

USDOT said it selected those INFRA grant recipients based on several criteria. In addition to prioritizing projects that would improve local economies, create jobs, and meet all statutory requirements, the agency considered how those projects would address climate change, environmental justice, and racial equity.

Further, USDOT prioritized funding to rural areas to address what it called “historic underinvestment.” As a result, approximately 44 percent of total INFRA funding will go to rural projects, which exceeds the 25 percent minimum share for rural projects required by law, the agency said in a statement.

Nine state departments of transportation received grants during this round of INFRA funding awards to support a variety of infrastructure projects:

As required under the current Fixing America’s Surface Transportation or FAST Act legislation, Congress gets 60 days to review USDOT’s proposed project awards. After the 60-day review period, USDOT is then free to commit nearly $1 billion in INFRA funding.