Amtrak to Invest $7.3B in New Railroad Equipment 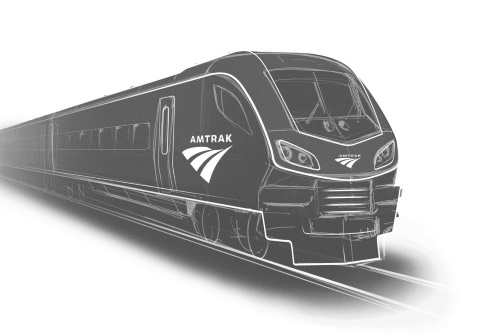 [Above image by Amtrak]

The deal also contains options to add up to 130 additional trains to support Amtrak’s growth plans along with a long-term parts supply and service agreement, facility modifications and upgrades, and other program expenses.

“These new trains will reshape the future of rail travel by replacing our aging 40-to-50-year old fleet with state-of-the-art, American-made equipment,” explained William Flynn, CEO of Amtrak, in a statement. “This investment is essential to preserving and growing our Northeast Regional and state-supported services and will allow our customers to travel comfortably and safely, while deeply reducing criteria pollutants.”

Siemens noted that some of those new trains would be its first hybrid battery powered units to operate in the United States – powered by both electric and diesel propulsion systems.

Other train design enhancements noted by Siemens include enhanced heating, ventilation, and air conditioning or HVAC systems, touchless restroom controls, as well as accessible restrooms and vestibules, an accessible Food Service car, and lifts for customers with reduced mobility, including wheelchair users.

With expanded capacity and the ability to shorten trip time, Amtrak expects its new equipment to add over 1.5 million riders annually. The new contract also dovetails with the recent celebration of Amtrak’s 50-year anniversary as well as with the competition of several expansion projects, including one in Virginia and one in Delaware.

Of those 83 new trains, she said 17 would be dedicated to New York State-supported routes to “significantly enhance” the passenger experience and incorporate cleaner fuel technologies. “[New York] is committed to working with Amtrak and the state’s congressional delegation to secure the federal funding necessary for the manufacture of these new trainsets,” Dominguez noted.

“We look forward to the delivery of the new trains for Amtrak Cascades service. They will enhance the passenger experience on one of the most beautiful train routes in the country,” pointed out Ron Pate, director of rail, freight and ports for Washington State Department of Transportation. “Since our trains will be the first off the assembly line, it’s exciting they’ll be unveiled in the Pacific Northwest.”

“The Commonwealth is committed to promoting, sustaining, and expanding state-sponsored passenger rail service across Virginia,” added Jennifer Mitchell, director of the Virginia Department of Rail and Public Transportation. “Replacing a 40-year-old fleet, the new Amtrak trains will help us meet those goals with modern, dual-powered engines, improved operations, increased fuel efficiency, and lower carbon emissions – in both electric and diesel mode.”

“The new dual-powered locomotives will drastically improve rider experience and reduce the dwell time in Washington, D.C., for a [train] engine change,” added DJ Stadtler, the newly hired executive director of the Virginia Passenger Rail Authority. “This will increase overall capacity and decrease travel time between anywhere in Virginia to New York City and Boston significantly.”