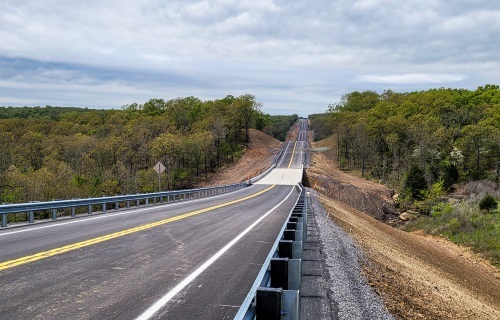 The Cherokee Nation is the first tribe in the nation to participate in a U.S. Department of Transportation “self-governance program” developed in 2020 – giving the tribe the ability to plan and oversee road construction and transit projects on the reservation without having to seek federal permission and oversight.

[Above photo by the Cherokee Nation]

“The Cherokee Nation has led a sophisticated transportation program for several years,” noted Cherokee Nation Principal Chief Chuck Hoskin Jr. in a statement. “Having oversight for the first time to plan, lead and oversee the finance of our own road projects will only mean more and better investments in terms of travel and infrastructure in the Cherokee Nation to the benefit of thousands of citizens.”

The USDOT’s program streamlines funding transfers for existing and future programs and grants that tribes may receive, while reducing “burdensome and costly regulatory requirements” by harmonizing applicable requirements – thus streamlining the delivery of transportation infrastructure.

It also builds off guidance incorporated in a report issued by the U.S. Government Accountability Office in April 2020 that highlighted “key factors” that “hinder effective consultation on infrastructure projects” between federal agencies and Native American tribes.

The department – which provided more than 104,000 transit rides so far in 2021 – will also now get federal transit dollars directly forwarded to it through the self-governance program instead of via reimbursement.