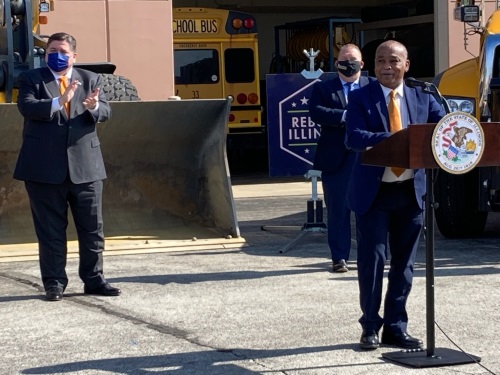 The Illinois Department of Transportation is preparing to get six long-term transportation improvement projects worth $95 million underway in central Cook County, while readying $110 million in transit grants for disbursement.

“These projects represent a significant investment in central Cook County and are a big step forward in our work to improve safety, mobility and create economic opportunity for years to come,” noted Omer Osman (seen above at podium), Illinois DOT’s secretary, in a statement.

Those six projects – targeted for completion over the next two years – ultimately seek to “create safer roads and bridges and provide jobs in central Cook County and across the entire state,” he said. They include everything from replacing pump stations on Interstate 290 to improving intersections, bridge upgrades, and pavement resurfacing.

Meanwhile, Osman said in separate statement that the state’s transit grants highlight the “essential role” transit providers “large and small” play in many Illinois communities as well as in the state’s overall multimodal transportation network. The agency plans to accept grant applications through August 31, he added.

That $110 million in competitive grants represents the second round of funding via the $355 million Rebuild Illinois Transit Capital Grant Program.

Projects funded so far through that program include rehabilitated and renovated bus stations and passenger information kiosks for the Champaign-Urbana Mass Transit District; a new transportation center in downtown Bloomington; and a new building to serve as a headquarters, training facility and dispatch center for the West Central Mass Transit District in Jacksonville.