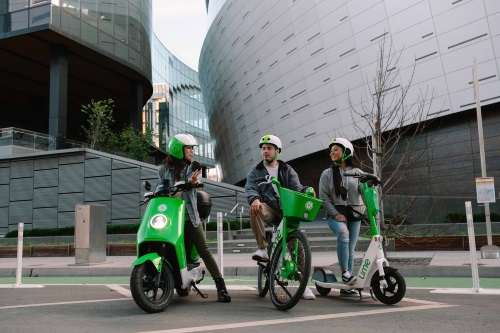 [Above photo by Lime]

“We know that intersections are key areas where conflict between cars and micromobility users are more likely to occur, which is why we’re excited to partner with SWARCO to reduce the potential for crashes,” explained Annie Chang, Lime’s director of safety programs, in a statement.

“[We] believe that with [our] expertise in micromobility data, we can make a real impact in improving safety for all road users, including pedestrians, cyclists and scooter riders.”

Several state departments of transportation across the country are engaged in similar efforts to improve intersection safety by revamping traffic signal operations.

For example, the North Carolina Department of Transportation recently awarded a $4.4 million contract to ALS of North Carolina for traffic signal upgrades at 44 intersections in Elizabeth City.

When complete, the project will allow signal synchronization across several arterial roads in Elizabeth City, which will improve traffic flow citywide. That, in turn, will increase motorist safety and reduce delays and emissions. The new system can also upload traffic data in real time and allow technicians to adjust signal timing and coordination remotely.

In November 2020, the Hawaii Department of Transportation expanded the installation of Blyncsy Intersect Connected Vehicle units to 16 state-owned traffic signals in East Hawaii and 14 in West Hawaii in cooperation with venture capital firm Elemental Excelerator – sensors that calculate travel times between units by anonymously collecting data from Bluetooth-enabled devices in passing vehicles.

The agency said it plans to use the data from those sensor units to not only optimize traffic signal timing but also provide key navigation information to CAVs – short for connected and autonomous vehicles – in the near future.

Reworking traffic signal timing to improve safety and reduce emissions more broadly on a national basis is also the focus on legislation proposed by Sen. Gary Peters, D-Mich., on June 14.

His bill – the “Smart Intersections Act of 2021” – seeks to create grant program within the U.S. Department of Transportation to fund projects that  reduce traffic congestion and fuel costs for drivers, while improving roadway safety and efficiency as well as emergency response rates, via the broader deployment of new traffic signal systems.