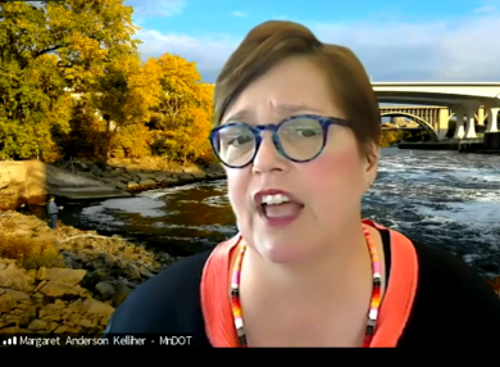 Climate change is causing “real, costly impacts” to the nation’s transportation infrastructure, according to Margaret Anderson Kelliher (seen above), commissioner of the Minnesota Department of Transportation.

[Above image via Select Committee on Climate Crisis broadcast]

Anderson Kelliher – who also serves as chair of the American Association of State Highway and Transportation Officials Committee on the Environment and Sustainability – made her comments June 30 in testimony before the House of Representatives Select Committee on the Climate Crisis.

“According to the Minnesota State Climatology Office, average temperatures have increased by nearly three degrees Fahrenheit statewide, with our winter temperatures are warming even faster, resulting in fewer nights of extreme cold,” she explained. “Extreme heat events are also a major safety problem – during the recent extreme heat just a few weeks ago, we saw at least 43 incidents of pavements buckling or exploding.”

Anderson Kelliher added that Minnesota is also experiencing more damaging rains due to climate change, including a 65 percent increase in the number of three-inch rain events and the frequency of “mega rain” events: widespread rains over six inches that she said “are now four times more frequent than” compared to the previous 30 years.

“Heavy precipitation directly causes flooding that closes and damages roads and bridges; disrupts travel and commerce; creates slope and embankments failures from saturated soils, and can lead to debris flows that block or damage culverts and bridges,” she said – literally in some cases “washing away” roads and bridges.

[Editor’s note: Those are just some of the environmental issues addressed on the new website recently launched by AASHTO’s Center for Environmental Excellence, described in the video below.]

To counteract those issues, Anderson Kelliher said the Minnesota DOT is working to make the state’s transportation system more resilient.

In particular, the agency is developing a Statewide Extreme Flood Vulnerability Analysis tool to improve processes for evaluating future flood risks to bridges, large culverts, and pipes. That helps the Minnesota DOT make “better data-informed decisions” about roadway projects based on the likelihood and magnitude of climate risks, she said – managing factors such as evacuation routes, access to medical services, freight needs, and detour length.

To reduce the impact of vehicle emissions on the environment, Anderson Kelliher said her agency launched a project in 2019 called “Pathways to Decarbonizing Transportation” to engage citizens and businesses in a variety of carbon reduction efforts.

“That resulted in the state pursuing low- and zero emissions vehicle standards, creating incentives for electric vehicles [EVs], including climate change in the environmental review process, and supported development of low carbon biofuels,” she said.

The Minnesota DOT followed that up in 2020 with the creation of the Sustainable Transportation Advisory Council – a group of public, private, nonprofit, and citizen leaders as well as elected officials to advise the agency on strategies to reduce carbon pollution, promote economic development, and support equity.

“We believe that this type of ongoing partnership between the public and private sector can be a model to help avoid the most catastrophic consequences of climate change,” she said. “This council is helping on several initiatives, including setting a goal to reduce vehicle miles traveled, promoting electric vehicles and EV charging, re-evaluating our approaches to congestion, and de-prioritizing adding lane capacity, which can not only induce demand but also adds new costs to our woefully-underfunded system.”

Anderson Kelliher added that similar efforts at the federal level could help reduce climate change risks on a broader basis. To that end, she recommended the following during her testimony: