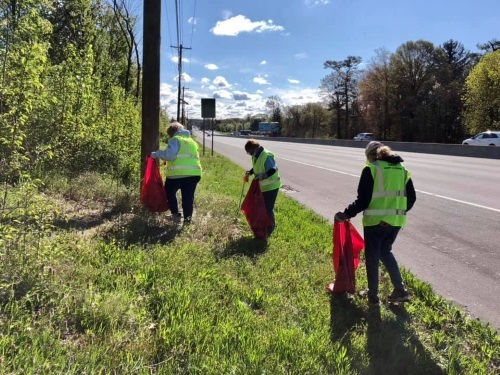 The New Jersey Department of Transportation recently rolled out a new an anti-litter campaign aimed at summer travelers – the main component of which will be aerial banner flown over the 147 miles of coastline between Cape May and Sandy Hook known as the Jersey Shore with the message “Please Don’t Trash Our Garden State.”

[Above photo by the New Jersey DOT]

Social media posts will accompany the aerial banner – scheduled to fly every weekend over the Jersey Shore now through Labor Day this year – to help further expand the reach of the anti-litter message among the public, the agency said.

The New Jersey DOT noted in a statement that its crews and volunteers removed 11,000 tons of litter at a cost of nearly $8 million over the past three-and-a-half years.

The agency added that its crews also removed 76,500 square yards of graffiti along state highways during that same period.

State departments of transportation across the country are ramping up similar anti-litter outreach and cleanup efforts.

The North Carolina Department of Transportation said that as of May 19, its crews, contractors, and volunteers have collected 6.3 million pounds of litter from along the state’s roads.

RIDOT, which said it spends $800,000 annually to pick up trash on state roads, noted that the goal of this campaign is to remove 1 million pieces of litter.

The agency is also seeking to buy specialized litter removal equipment that attaches to its maintenance vehicles for some $750,000 so it can rake and clean litter from strips of land and other larger green spaces along roads more easily.