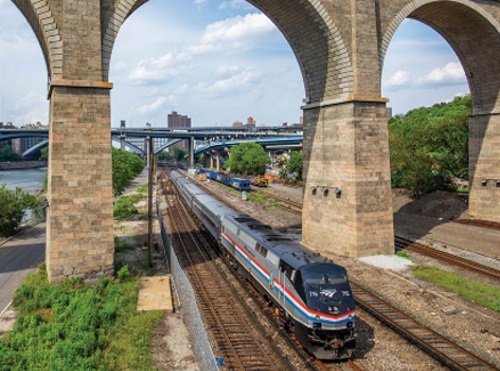 The corridor – which handles more than 800,000 daily passenger trips between the greater Washington D.C. and region surrounding Boston – should witness travel-time savings valued at nearly $140 million annually for intercity and commuter rail passengers from the C35 plan, the NEC said.

Amit Bose, deputy administrator of the Federal Railroad Administration and co-chair of the NEC Commission, said in a statement that implementing the C35 plan “will result in a modern and resilient railroad” with safe, reliable, and more frequent service; connections to new markets; and reduced travel times between communities.

“It will also connect transit riders all along the corridor with intercity trains, which so many communities and businesses rely on to get individuals to work and essential services,” noted Nuria Fernandez, administrator for the Federal Transit Administration. “C35 will do so while taking cars off the road, helping to lessen the impacts of climate change. I look forward to its full implementation.”

“The C35 plan is the culmination of two years of hard work and detailed analysis [and] also represents the start of a new level of coordination among Amtrak, NEC state and commuter railroads, and the federal government,” added Jamey Tesler, acting secretary and CEO for the Massachusetts Department of Transportation.

“Delivering sustained investment in the NEC and connecting corridors will improve mobility for millions of Americans, create jobs, open access to opportunity, support our fight against climate change, and continue to make the Northeast a global economic powerhouse,” he said.

Peter Alviti, Jr. – director of the Rhode Island Department of Transportation – emphasized that the C35 plan “is important to the future economic growth of Rhode Island by providing faster, more frequent, and less expensive transportation alternatives between Providence and Boston and beyond.”

“C35 rail investments are the building blocks for our country’s future and transforming the Northeast,” pointed out Joseph Giulietti, commissioner of the Connecticut Department of Transportation.

“As a blueprint for making tangible and significant social, equitable, and economic impact in countless communities, we have an opportunity to reshape how people move – where and why – for this generation and the next,” he added. “Connectivity will be key to ensuring economic opportunities are created for all people.”