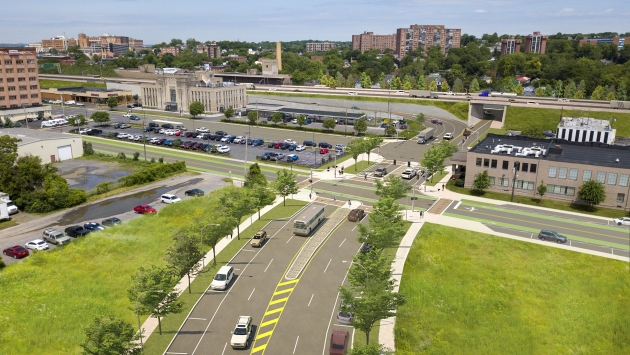 The New York State Department of Transportation unveiled a draft of the Environmental Impact Statement or EIS for the $1.9 billion Interstate 81 Viaduct Project; a project that seeks to remove the elevated structure dividing the City of Syracuse and replace it with an integrated “Community Grid.”

[Above image via the NYSDOT]

That “grid” would disburse traffic along local north-south streets, create a new business loop, and reconnect the neighborhoods severed by the interstate.

The public now has 60-days to comment on the draft EIS – a draft developed in concert with the Federal Highway Administration following 11 neighborhood meetings and numerous one-on-one sessions with business owners, stakeholders, residents, and elected officials, NYSDOT said.

In total, the agency said it received more than 1,000 comments that were ultimately included in the draft EIS submitted to FHWA for its now-completed review.

“The Interstate 81 viaduct project is a once-in-a-generation opportunity to not only restore our aging infrastructure but … reconnect long-divided neighborhoods, restore vitality and create equity and opportunity,” explained NYSDOT Commissioner Marie Therese Dominguez in a statement.

Governor Andrew Cuomo (D) also recently announced that the state’s fiscal year 2022 enacted budget includes $800 million toward the first phase of construction on the I-81 Viaduct replacement project, with construction still expected to begin in 2022.

NYSDOT added that the “Community Grid” replacement for the I-81 Viaduct is the “preferred alternative” as it will relieve existing traffic congestion issues within the city while improving access to and from the interstate highway network and key destinations, including the downtown business districts, area hospitals, and Syracuse University.

The plan calls for the removal of the aging and now-obsolete I-81 Viaduct between the New York, Susquehanna and Western Railway, as well as the I-81 and Interstate 690 interchange – reconnecting neighborhoods separated since the viaduct’s original construction in the 1960s.

The project would also upgrade a portion of Interstate 481 – subsequently re-designated as I-81 – as well as construct a new “Business Loop 81” along Almond Street to improve connections to downtown and other business districts.

It will also provide safe and American Disabilities Act-accessible pedestrian and bicycle amenities throughout the project area, the agency said.