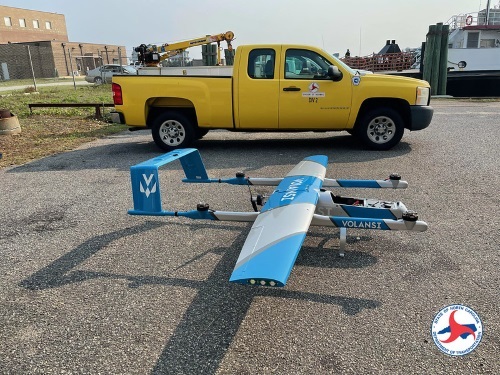 “This is a tremendous first step in better connecting Ocracoke Island to potentially life-saving supplies and equipment,” explained Eric Boyette, NCDOT’s secretary, in a statement.

“Today Ocracoke Island is accessible only by plane or by boat. What we’re working on here is an entirely new, third method of serving the needs of Ocracoke’s people,” he said.

NCDOT’s Division of Aviation, in partnership with the NCDOT Ferry Division and U.S.-based drone logistics company Volansi, conducted the two eight-mile round trips that each averaged 18 minutes of drone flight time.

“This was just a small trial, but we hope to continue scaling this up to larger payloads and longer flights,” said Ben Spain, manager for NCDOT’s Unmanned Aerial Systems program. “Long-term, we could see deliveries coming to Ocracoke all the way from the mainland.”

The NCDOT noted its next test – the timing of which remains undetermined – would involve flying a drone from Hatteras all the way to the Village of Ocracoke.

The flights – conducted under NCDOT supervision by a team from Volansi, which also provided the aircraft – tested the Volansi C-10 Gemini, capable of both vertical takeoff and landing and fixed-wing horizontal flight. It can also carry a payload up to five pounds.

NCDOT’s Ferry Division played an integral role of the operation as the Gemini drone can also be fitted with a camera to monitor shoaling in the ferry channels; reducing the strain on the ferries as a way to get important items quickly to the island.

The Federal Aviation Administration provided a waiver to NCDOT for beyond-visual-line-of-sight flights for this operation via the agency’s BEYOND program. That program, launched in November 2020, enables select state and local agencies to conduct drone operations that test the future capabilities of the technology.